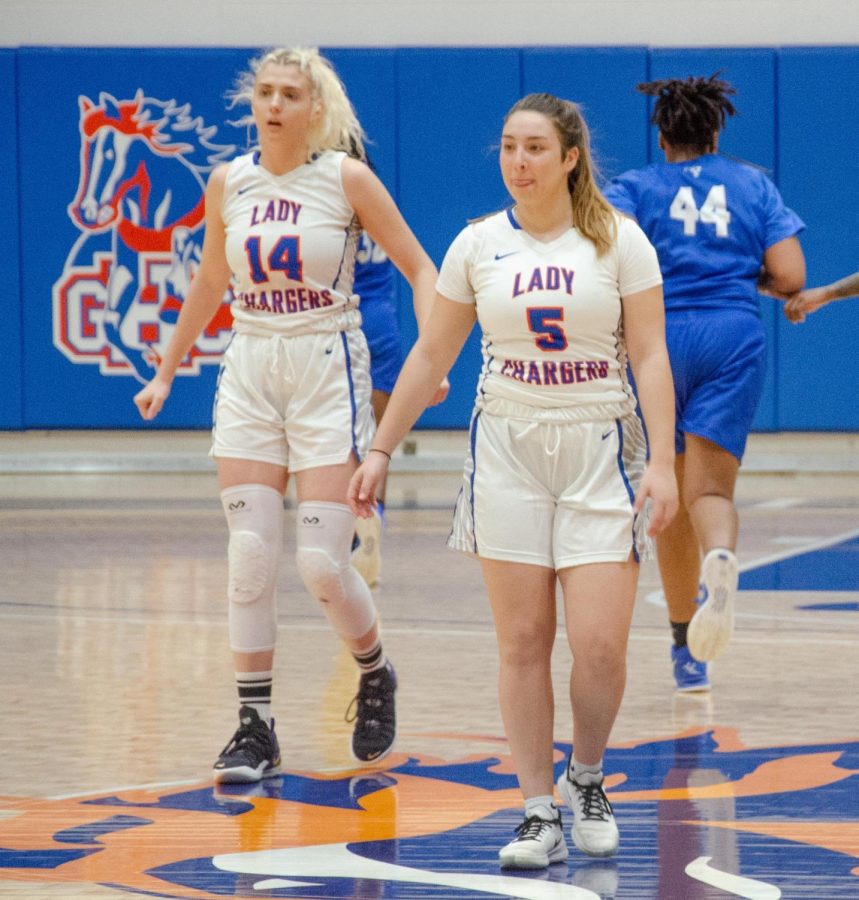 After the Lady Chargers scored a basket, Rita Kun (14) and Naz Oget (5) get ready to play defense in their game against Spartanburg Methodist on March 6, 2021.

After winning the GCAA and Region titles, the GHC Lady Chargers had their eyes set on the next step of their journey: the NJCAA National Tournament in Lubbock, Texas.
The Lady Chargers won their first three games against Hutchinson Community College 79-69, Trinity Valley Community College 84-73 and Jones College 81-74. Their streak ended in the championship game, losing to Tyler Junior College 92-80.
The Lady Chargers were faced with the task of playing all four teams in four days, something that changed the way they trained heading into the tournament.
“We were prepared. We did a whole bunch of conditioning the week before we went out,” said Lady Chargers player Sasha Shishkina in an appearance on the Post Buzzer podcast.
Lady Chargers player Sandra Lin said that she pushed through the conditioning while at the tournament for her team.
“Even when someone off the court says that their body is sore, they go on the court and try to play their hardest to win the game,” Lin said.
The Lady Chargers were able to get the number three seed in the tournament, so they had a first-round bye, something that hurt many of the top seeds, but not the Lady Chargers.
“One of the things to look back on is that while we were in Lubbock, we were the hunted team,” Lady Chargers assistant coach NaeNae Saxton said.
“All of the top teams had been knocked out early… and that made them think that they could knock us out,” Saxton said.

In fact, the Lady Chargers were the only team higher than the eighth seed to win their second-round matchup against the Hutchinson Community College Blue Dragons.
The Lady Chargers were down 11-2 early in the contest, but found their footing in the second quarter, leading by 11 points at halftime.
They took that lead, winning the game 79-69.
Next up was the Trinity Valley Community College Lady Cardinals, who had just knocked off six-seeded Southern Idaho in the second round.
“One big accomplishment while we were there was beating Trinity Valley, who was the runner-up last year,” Saxton said. “It was amazing just watching our girls go up against the teams that had already been there.”
The Lady Cardinals didn’t come alone either. The team brought close to 90 cheerleaders to the tournament to cheer the team on.
“When we played against them, we blocked the noise out,” coach Saxton said. “When I say it was loud, it was loud.”
Nonetheless, the Lady Chargers were able to block out the noise and win 84-73 to advance to the final four teams.
All that stood in the Lady Chargers’ way of reaching the championship game was a matchup against the Jones College Bobcats, who were the 23 seed in the tournament but found their way into the final four teams.
The Lady Chargers didn’t back down from Jones College, pulling out an 81-74 victory and advancing to their first-ever championship game appearance.
“I remember coach Harrell saying that we will definitely make the final four this year,” Shishkina said.
Their opponent in the championship game would be the Tyler Junior College Apaches, the team that had previously upset the top-ranked team in the tournament.

The Lady Chargers got things going fast, building up a three-point lead at the end of the first quarter.
The lead wasn’t big enough as the Apaches came back in the second quarter and wound up with a three-point lead at half
time.
The offense for the Lady Chargers was stagnant in the third quarter, with the team making only one basket in the first five minutes while the Apaches built up an 11-point lead.
That run proved to be enough to hold off the Lady Chargers despite a late push that put them within six points. Ultimately, the Lady Chargers lost the game 92-80.
While Tyler College left Lubbock with a championship, the Lady Chargers left feeling humbled by even having the opportunity to play in the championship game.
“The outcome didn’t come like we wanted it to, but to be in the top two– that’s excellent,” Saxton said. “Just watching them not fall apart and just continue to play Georgia Highlands basketball.”