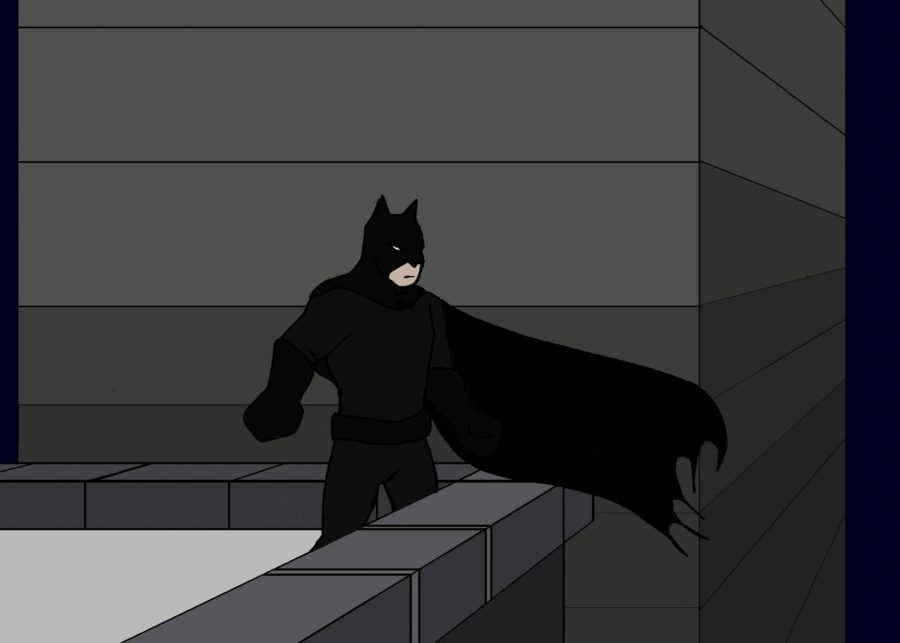 "The Batman" movie is both dark in themes and general appearance.

Director Matt Reeves’ film “The Batman” is full of shadows. From the midnight setting of almost every scene, to the black paint around Robert Pattinson’s eyes, shadows envelop this film. Dark themes prevail throughout, contrasting the brokenness of Gotham with glimmers of hope and light throughout the film. This contrast of hope amidst darkness begins in the opening sequence, during Batman’s opening monologue:

With darker characters and most scenes shot at night, the wealth and diversity of color, from cinematography to character development, is breathtaking. These light themes and colors provide a beautiful contrast to the darkest Gotham yet.

What the Wall Street Journal called “The darkest superhero blockbuster ever made” is perfectly appropriate for Batman; an angry superhero in a despairing city, working out of a cave and drawing on bats for inspiration.

While reflective of Batman, it’s amazing how almost three hours of this darkness captures and retains the attention. Greg Fraiser’s cinematography brings out the nuance in every shadowy scene and shows us a million shades of black. Whether it’s a midnight motorcycle chase under grimy city lights, or pitch black with neon strobes in The Penguin’s Iceberg Lounge, black captures the eye throughout.

This contrast is also a driving force in the story, as Batman hunts down Riddler and the truth about Gotham. A serial killer writing “No More Lies” on his corrupt victims, Riddler declares he will likewise “unmask the truth.” As Batman pursues answers as vengefully as Riddler, the movie contrasts the two and begs the question: What makes Batman different?

Riddler asks this himself at the movie’s end. Finally behind bars at Arkham Asylum, Riddler declares he and Batman are basically the same and assumes the Dark Knight is joining him, united by their consuming vengeance. When he reveals his plan to flood Gotham, wiping out corruption through death and destruction, Batman faces a choice. Will he exact vengeance upon corruption by joining Riddler, or hope against all odds to save the city? As the Dark Knight races to save Gotham from certain doom, we see “The Batman’s” most significant glimmer of light. At Gotham’s darkest, Batman’s vengeance is overtaken by his hope.

Though he’s called “Vengeance” throughout, hope truly marks the Caped Crusader at the end of the movie. When Catwoman abandons hope for Gotham in the final scene and asks Batman to leave the city with her, he turns her down.

Although he’s fallen in love with her and seen darkness envelop Gotham, he won’t leave or lose hope for the future. As the two part ways, the movie ends with Batman returning to Gotham City, not as a harbinger of vengeance, but as a dim glimmer of hope.

“The Batman” reminds us that light is lightest in the darkest of darkness. Despite shadowy cinematography and moody acting, this movie isn’t about darkness, but the light that shines so brightly in it. During the closing sequences, Batman plunges into the floodwater and leads survivors to safety with a lit flare. Far from a dark omen, this scene presents Batman as Gotham’s light of hope. Amidst climate, health, politics, and many other crises, this film is a much-needed antidote to despair. In a world becoming dark as Gotham, “The Batman” is a beautiful reminder that there’s light if even one person will dare to hope.