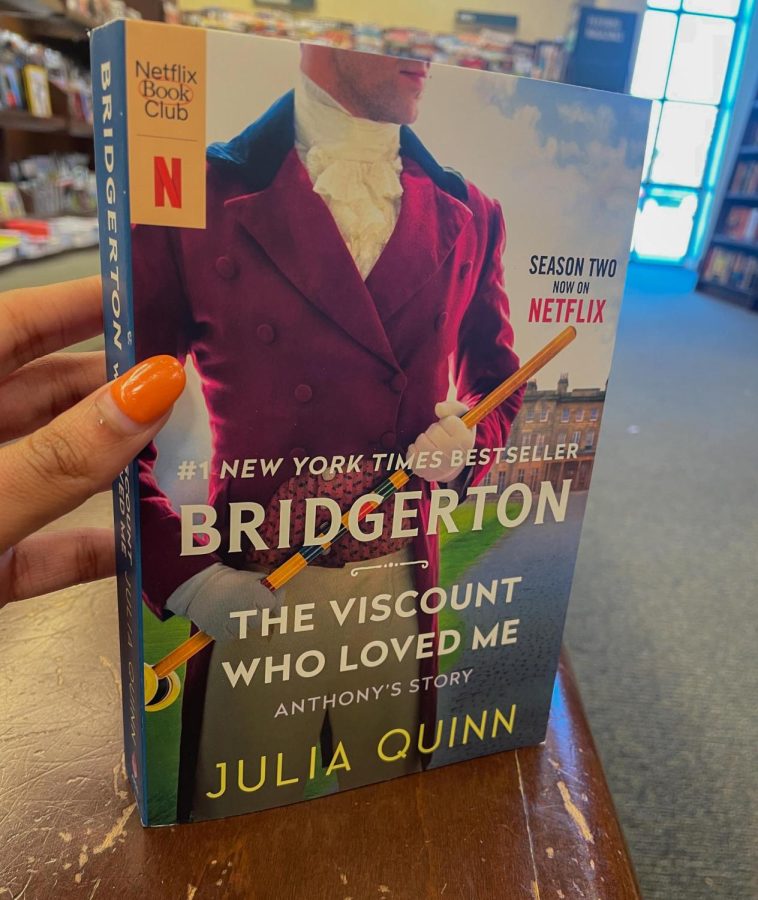 Book #2 of the Bridgerton series, the adaptation of season 2 derived from this book.

The season two release of “Bridgerton” comes a little over a year later than its first season, which left everyone wanting more. The series is based on romance novels by Julia Quinn which have been turned into screenplays like other novels lately.

The screen adaptation of ”Bridgerton” is similar to that of “Outlander,” another hit Netflix show based on romance novels by Diana Gabaldon.

“The most prominent commonality of the two shows is that, “both shows look at sex and intimate scenes through a female gaze rather than a male one,” Neelah Debnath of Express magazine said.

This season has no shortage of elegance, lush gardens, massive houses, historical components and let’s not forget the intense romance. It’s important not to begin your viewing thinking it will be the same as season one. Not that you’ll be disappointed, but it deserves a fresh perspective.

Season two follows Viscount Anthony Bridgerton on his quest for a wife to fulfill his needs, but surely not for love. He sets his sight on the younger of two new sisters in town, who is everything he would want in a wife.

While Edwina is smitten, it’s not so easy for him to win her over without a fight from her older sister Kate who undeniably loathed Anthony, or so we thought.

“The moments between Anthony and Kate are delightful, as each denies the attraction they feel for one another by being hostile to one another,” Sheena Scott, a contributor to Forbes magazine, said.

Their passionate bickering could not withstand their ultimate fate of ending up together despite their efforts to deny it.

Even though the season lacked the numerous sex scenes we’re used to, it allowed for viewers to focus more on character personalities. We were able to view Anthony in a different light from the arrogant, marriage-opposing rake we met in season one. We get a glimpse of how he lost his father and why the viscount role was presumed to him.

The bickering between Anthony and Kate had plenty to do with them being so similar. Kate also opposed marriage and her only mission was to ensure her sister found the perfect suitor, who actually had feelings for her instead.

This season also focuses on the unveiling of Lady Whistledown, the town’s scandalous gossip writer who spared no one. She leads a busy life trying to maintain her gossip girl persona and being present in her grand life. While viewers are aware of her identity, which was revealed at the end of season one, it didn’t take very long for Eloise to find out her dear best friend’s secret either.

We also get a sneak peek of what’s likely to come in future seasons for the Bridgerton siblings. Eloise is in love with a commoner, Collin is still in love with Marina and Benedict is trying to figure out where he fits in his family’s world of glamor.

Viewers may be disappointed if they go into watching this season expecting the frequent intimate scenes from the last season, as the build-up is slow. However, it is important to remember that this series is a book adaptation with a different plot each season to keep us craving more.