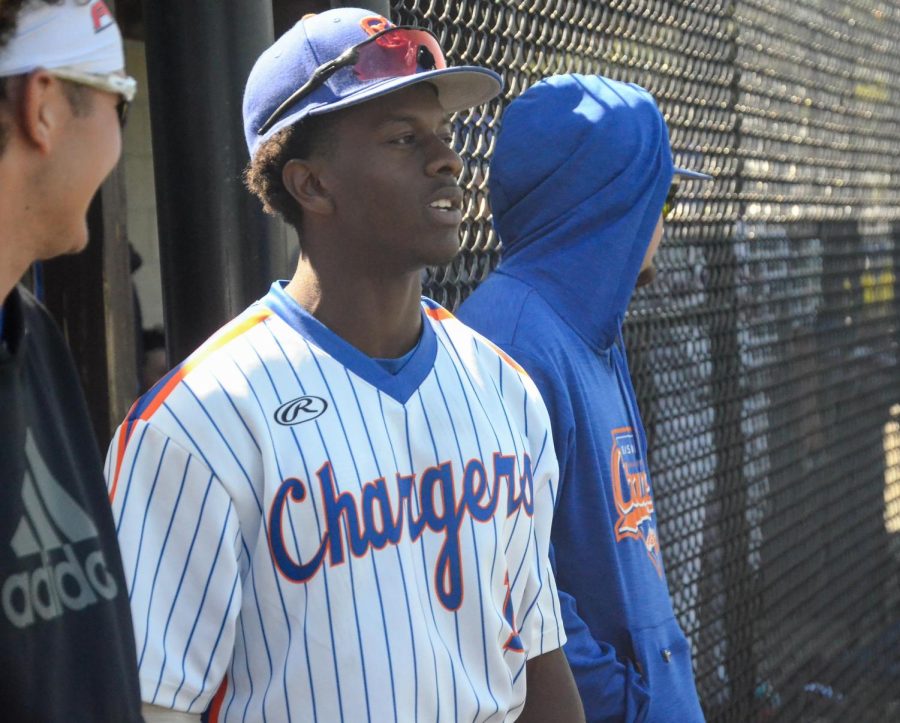 Chargers player Zayd Brannigan looks on as he awaits his turn to bat in their game against Gordon State College on April 19, 2022.

On April 19, the GHC Chargers baseball team picked up win 37 on the season with a 16-9 victory over the Gordon State Highlanders at LakePoint Station.

There was one player who stood out offensively that consistently stepped up for the Chargers when they needed him: Zayd Brannigan.

Brannigan seemed to always be locked in on the ball in the game, with each of his first three plate appearances resulting in a double. He would finish the game 4-6 with three runs batted in. Brannigan was a major factor in the Chargers nearly ending the game early.

“I was just seeing it good, being on time on fastballs,” Brannigan said. “I expected to have a good game, just like every other game I play.”

The Chargers offense was able to capitalize on Valentine’s outing, building up a 14-5 lead in the fourth inning, nearly ending the game early due to the mercy rule: if a team is up by 10 runs, the game is over.

Baylor Akin got the start on the mound for the Chargers, but was quickly replaced by Zack Valentine.

Valentine, who usually comes in as a closing pitcher, was able to throw four scoreless innings while the Chargers offense collected run after run.

Akin’s start on the mound started with two walks, and after that it just seemed to get worse for him.

The Highlanders built up a 3-0 lead before the first inning was over, as Akin struggled to keep his composure on the mound. The Chargers were able to tie the game up in the bottom of the first before Akin took the mound again.

Chargers head coach Dash O’Neill was hopeful that the tough first inning would be enough for Akin to come out strong in the second inning. After Akin gave up two more runs, O’Neill went to the mound to let Akin know that he was being replaced, motioning for Valentine to head out from the bullpen and take over.

“I just knew that I had to attack the zone and get ahead of the count… me and Ben [Olsen] were on the same page for the most part,” Valentine said. He added that while he doesn’t normally pitch for four innings in his outings, it is something that he adapted to in the moment for his team.

That’s when the luck changed for the Chargers.

Valentine, who is used to pitching only two or three innings, stayed in the game until the sixth inning because of how impressive he looked on the mound.

“Zack Valentine coming in and giving us a chance on the mound… he came in and gave us some stability on the mound and stopped them from coming,” O’Neill said.

Valentine did not allow a run until the sixth inning.

The Chargers would go on to play a full nine inning game, and when the final out was recorded, the Chargers secured the victory.