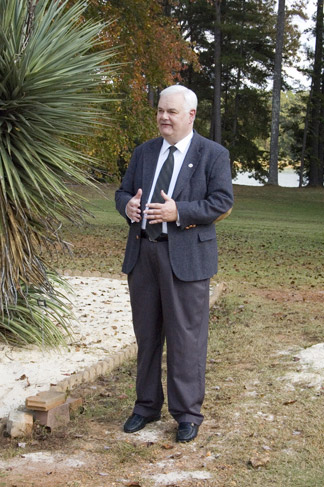 The cactus garden on the Georgia Highlands College Floyd campus was rededicated to the memory of Melvin Perry on Thursday, Oct. 25. A former associate professor of political Science at GHC, Perry died in 2001 after a brief battle with cancer.

The cactus garden was originally created to honor Perry’s memory by Alberta Johnson, former professor of psychology, a fellow faculty member with whom he shared a love of the southwest. The garden had fallen into a state of disrepair before the 2012 renovations. Librarian Russell Fulmer’s FCST class performed the renovations in a coordinated effort with GHC’s Green Highlands club as well as the Office of Adult and Service Learning.

Various GHC faculty and staff members, along with some students and a few members of Perry’s family, attended the rededication ceremony. Laura Musselwhite, interim vice president of academic and student affairs led the ceremony, which also featured some words from Perry’s brother, Mark.

Perry worked at GHC from 1982 to 1985, when he resigned to transfer to Eastern New Mexico University. He returned to GHC, which was then known as Floyd College, in 1991, and remained with the college until the time of his passing.