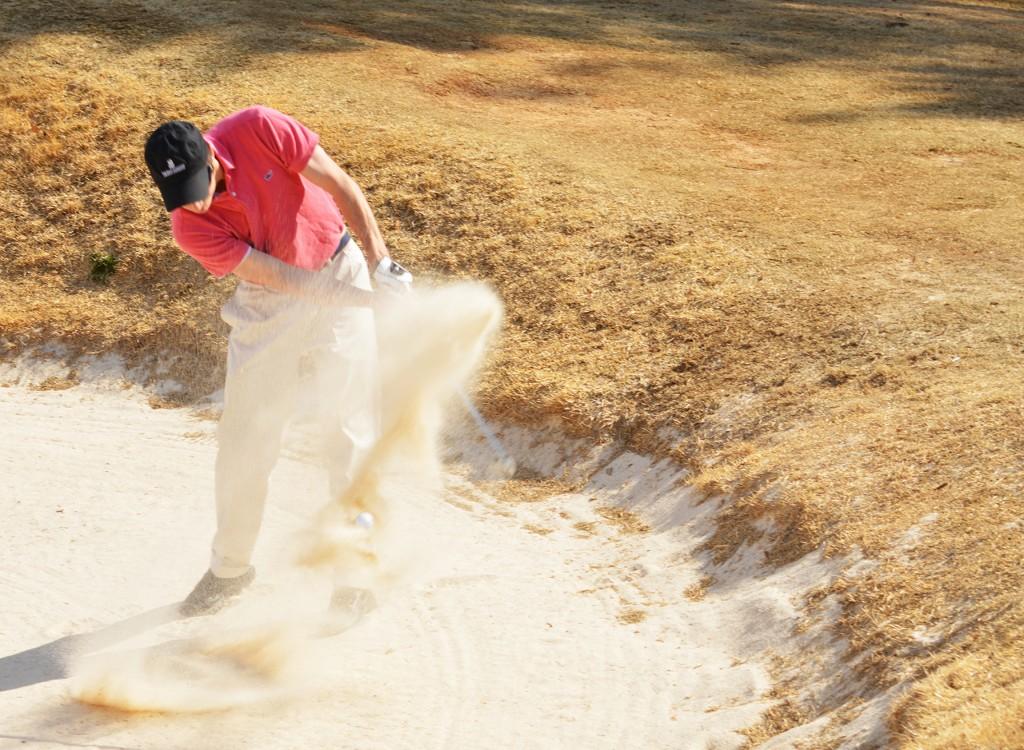 John Chandler, captain of the new GHC golf team swings his way out of a sand trap. Photo by Tatiana Smithson.

She was originally approached by a member of the National Collegiate Club Golf Association (NCCGA) who urged her to establish a golf team at her college.

The NCCGA helps colleges build recreational and competitive golf teams for students to participate in.

Invested in helping promote fundraising for the Wounded Warriors project, sophomore John Chandler was unexpectedly given the opportunity of his dreams. Wood approached Chandler at the fundraiser and asked if he would be willing to help start a golf team at GHC and be the captain.

Chandler has played golf for years and jumped at the chance to put together a team.

“While in high school, I never had the opportunity to play on a golf team. Having this opportunity presented to me was rather exciting and I knew right away I wanted to do it,” said Chandler.

The minimum for a college school golf team is five, and so far Chandler has built a team of seven. Chance Childers and Patrick Davis are the most skilled players on the team.

The golf team currently has practice as a group on Sundays and uses public courses like Cobblestone Golf Course in Acworth. The team plans to join a golf tournament in April. The members are all current golf enthusiasts and are encouraged to practice in between team meetings.

Chandler expects the team to be an outlet for students to participate in and an opportunity to network with other like-minded individuals.

College level golf teams are put into regions, and Georgia Highlands falls into the Southeast division. The team will play against both two-year and four-year colleges.

Wood said, “I think John has put together a great co-ed squad, and the more we can get GHC’s name out the better.”

The club golf team is still open for new members and can be contacted through the Facebook page, Georgia Highlands Golf Club.