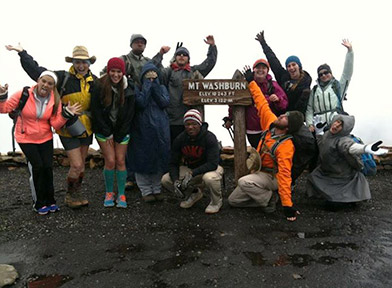 Matt Williams of the Georgia Highlands College Floyd campus found this trip to be the perfect opportunity to propose to his girlfriend, a non-GHC student.

“We wanted to go somewhere beautiful,” Williams said. “We both work really hard and never have time to take a vacation so this was a great opportunity.”

The proposal took place on Mt. Washburn in Yellowstone National Park on June 27 right before the end of the trip. Williams hid the ring in his hat while they hiked the mountain. Despite not having an exact day or time picked out, Williams saw this as the perfect opportunity.

“We had just experienced this alpine lightning storm, and climbing the mountain and making it through all that signified us being able to overcome obstacles together and being able to do it happily,” Williams stated.

It was a surprise to everyone on the trip except Billy Morris, associate professor of geology and trip coordinator, who was informed beforehand.

Morris’s reaction to the proposal was positive. He said, “I was honored. I thought it was just the coolest thing ever.” He then added, “We’ve had several relationships established on the trip, and I don’t know how many have lasted except for one.”

Williams said there were no plans for a geology themed wedding but said, “We do plan on growing our own food for it.”

Following the trip’s usual itinerary for the past five years, the group visited numerous active geological locations in Wyoming including Yellowstone National Park.