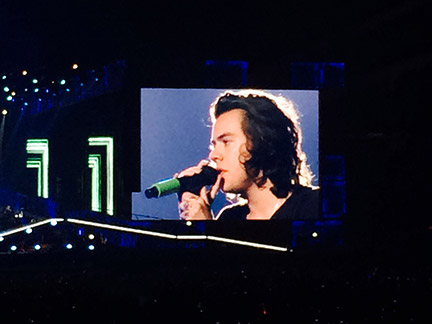 Harry Styles of One Direction performs during the WWA concert in Atlanta. Photo by: Karlee Helms

On Wednesday, Oct. 1, the Georgia Dome was packed with screaming girls and unbelievable excitement levels. What caused all of this hysteria? A One Direction concert of course!

The talented British/Irish boy band announced their “Where We Are” stadium tour in late November of 2013.

The world-wide tour was sold out in just minutes, filling a total of 69 stadiums in Europe, North and South America.

With the Atlanta concert being one of the last shows of their tour, 1D ended the WWA stadium tour on Oct. 5 in Miami.

The opening act for 1D was a talented Australian band by the name of 5 Seconds of Summer, or 5SOS for short.

Their EPs and their debut album that was released back in July are filled with a mixture of rock and pop.

At the concert, 5SOS played a number of songs off of their self-titled album including pieces such as: “End Up Here,” “Amnesia”, “18” and their first single to be released in the US, “She Looks So Perfect.”

Their performance was very energetic and so much fun to watch. They have recently announced their next single will be “Good Girls.”

5 Seconds of Summer will be coming back to Atlanta on August 5, 2015 at Aaron’s Amphitheater for their headlining tour “Rock Out With Your Socks Out.”

When the time finally came for 1D to take the stage, the crowd had become even louder, if that was even possible.

Once the screen went blank from the intro video, and their image showed up on the screen, the screams and tears were never ending.

Kicking off the night with one of their many hit songs, “Midnight Memories” One Direction worked their way through a 23 song set list including songs off of all three of their albums.

The energy in the stadium was at an all-time high. One could not tell that this concert was at the end of the tour. The group’s vocals were flawless. Their stage presence was great and very entertaining, seeing the band members joking around with each other and being as silly as ever.

It was refreshing to see something different and not something that has been choreographed to look impressive and flashy. They rely on their voices and their music to be the main focal point throughout the concert.

One Direction’s newest single “Steal My Girl” is just a taste of what fans should expect from the band’s fourth album titled “FOUR.” It is scheduled to be released on November 17. Students can pre-order the album from iTunes at any time.

This concert gets a grade of: A+