Fantasy football adds a new dimension to the game 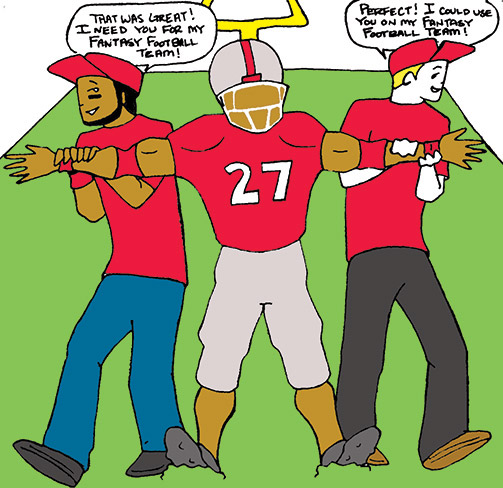 Everyone has his or her fantasies; however, one of the most popular fantasies today is fantasy football.

Fantasy football is an online game in which anyone can become the general manager and the coach of his or her very own football team.

There are even one-week fantasy football leagues in which players can draft a team, and if their team wins, the players win money. If they don’t win, they can draft a whole new team the next week.

It is simple to start; just sign-up, draft a team from all the current NFL players and set a line-up. All that is left is to watch and see how many points each of the football players can score. Then, after a week of football, players can edit their lineups based on how their team performed.

Point systems vary by website and leagues, but most are pretty basic: a touchdown earns six points, a field goal earns three points and so on.

Floyd Student Life Coordinator and fantasy football player, John Spranza said, “I started about fifteen years ago. I had just stopped working for a newspaper, and some of the sports writers were talking about it and how it was just coming out on the internet, and I thought it was a neat idea.”

Before they had it on the internet, people still played fantasy football, but it took a little more work.

Playing required getting together and drafting a team and putting it on paper as spreadsheets. Players also had to actually watch the real-life football games to play.

Now, though, through the internet, participating has been made much easier.

Even some Presidents and other government officials have drafted teams and played in leagues.