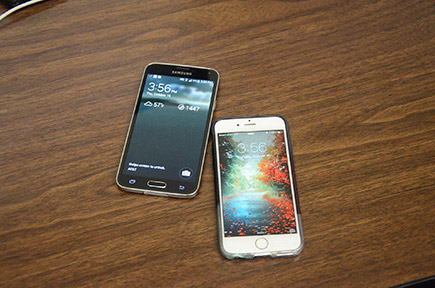 Lines of people formed outside AT&T, Verizon and several other cell phone stores on Sept. 19 in order to be one of the first to receive the iPhone 6 and iPhone 6 Plus.

Features that consumers like about the new phone are its larger size, the thinness and its compatibility with IOS 8, unlike the previous iPhone models.

The iPhone 5s was the first phone to use fingerprint technology. The newer iPhone models use this feature so users can quickly unlock their phones.

However, if somebody who doesn’t have fingerprint access needs to unlock his or her phone, then that person can use the passcode lock that the previous models implemented.

The IOS 8, iPhone 6 and iPhone 6 Plus are compatible with any Mac source. Any notes taken on the laptop will automatically be saved and show up on the iPhone.

All of Apple’s devices use iCloud, which consumers receive when they sign up for their iTunes account. The iCloud lets consumers back up photos, documents and important dates.

If consumers lose their phone, then they can open up their iCloud and find the exact location of their device, and if they are sure it was stolen, then they can completely erase the memory on the phone.

The phones will soon be able to hold a credit card. This is great for those who forgets their wallet. So if the phone’s owner were to go out without his or her wallet, that person would still be able to make purchases with just a scan of the phone.

When purchasing an iPhone, consumers are not only buying a phone with many new and upcoming features, but they are purchasing a lifestyle that can help make life easier.

Samsung’s Galaxy S5 is one of the most recent and most popular smartphones to run on Google’s Android operating system.

Google is almost like the Midas of big name companies. Almost everything Google touches turns into an instant money-making device.

Android is an operating system used on hundreds of phones, with the most popular line of phones being the Galaxy S5.

Consumers have the option to run the phone on their own personal Gmail accounts.

Doing so opens up the ability of using the Google Play Store to download games onto their phones.

If something happens to a user’s phone that leads to the user buying another phone, any game data that was on the previous device is transferred onto the new one.

The user can wipe all the information off the device with just the click of a button from a computer by using  Google Dashboard.

On a technical level, the phone is one of the first smartphones to be introduced as completely waterproof.

A rubber lining around the battery pack and the use of a waterproof speaker protects the phone from water damage.

The camera was another device that saw improvement.

The Galaxy S5 features a 16 megapixel camera, which is better than some digital cameras.