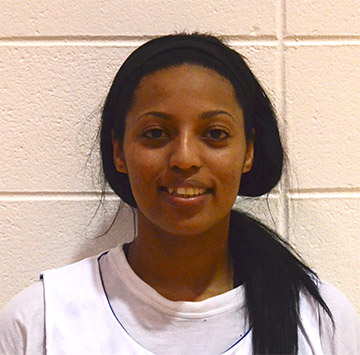 Fataar played basketball at her middle school in South Africa. She later played for her state team from 2008 until 2010.

Not only did she play for her state team, but also for the South Africa National Team in 2009 and again in 2010 when she was scouted by a representative of a private boarding school in New Hampshire by the name of Kimball Union Academy (KUA). KUA offered Fataar a scholarship to play basketball here in the United States.

After conversing with her family and coach, she decided to accept the offer and moved to the town of Meriden, N.H., where the school is located.

She continued to play basketball for KUA until she graduated in 2012 and went on to play in college at South Plains University (SPU) in West Texas.

After a year at SPU, Fataar decided she did not like it there due to conflicts with the coaching staff and found GHC on the internet.

Following a call and a visit, Fataar decided to transfer and signed on with the GHC Lady Chargers basketball team.

“Basketball is a little different here than it is back home,” Fataar said, “It took me a little while to adjust to the pace of the game and actually playing indoors.”

Fataar is majoring in education. She plans to use her degree to give back to her community in South Africa.

Every time she returns home she helps tutor the children of her community. “Education is not as advanced as it is here,” stated Fataar.

She plans to someday go back to South Africa to teach and use her experiences and the education she has received in the United States to help children get a better education there.