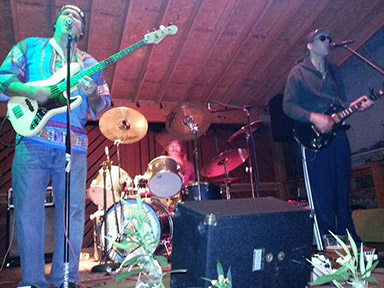 The Donors perform at the Annual Halloween Event at Schorders in Downtown Rome. Photo by: Amanda Howell

The first band, Graham and Vann, started the show off at 7 p.m.

Though everything started off slow, things picked up fast as the anticipating large crowd filtered in and The Wet Bandits began to set up. Lead singer, Eddie Waits took the stage dressed as Elvis Presley and the crowd livened all around the courtyard.

Cyanide Sundae and The Muletide Perkins Trio brought a new and energetic change in sound to the evening. Each band was a delight to listen to, and so were the cheers that came at the end of each song.

The Donors were the last trio to tune up and play once again for a loaded courtyard at Schroeder’s. Friends, fans and family listened as the band covered Pink Floyd’s “Fearless.”

With the last symbol strike, guitar strum and bass thump, all the patrons began to say their goodbyes and filter back out of the restaurant while the amazing and loyal servers began to do the last of the cleaning up from one more great Halloween night downtown.