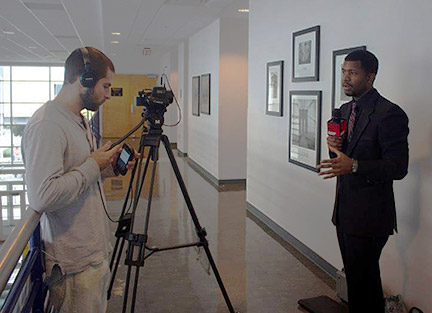 Currently in his last year at Georgia State University, Victor Williams, 21 and a GHC alumni, is most certainly a busy man.

“I am a resident assistant, Georgia State TV anchor and reporter and, believe it or not, enrolled in six classes.”

“GSTV has enabled me to interview all types of people, including T.I., B.O.B and Laura Ling,” Williams said.

With a passion to pursue a career in journalism, Williams said journalism wasn’t his parents choice but was his. “My parents wanted me to do forensic science,” he said.

In high school, he had a teacher tell him he had a natural talent for speaking. With that, he started his journey to perfect his skill.

“If there were ever an event at school and the staff needed a student speaker, I was always the person they called,” Williams said.

Soon after graduating from high school, Williams chose to attend GHC’s Douglasville Campus because the college was close to home and more affordable at the time.

“I could honestly say, going to Georgia Highlands has been one of the greatest decisions I have ever made,” Williams said.

While at Georgia Highlands, he participated in a wide variety of GHC student clubs.

Williams said, “At Highlands, I was the president of Brother 2 Brother, an Orientation Leader, in the Math & Science Club and vice president of public relations for Phi Theta Kappa.”

Williams stated that he felt he was busier at Georgia Highlands than he is now at Georgia State University.

Soon to be a Georgia State grad, Williams stated that he is currently on a quest for anchor jobs after college.

Even though starting from the ground and working his way up is the route he plans to take, he has put FOX News, WSBTV News, 11 Alive and others on his application list.

Motivated by seeing himself on GSTV daily, Williams is inspired to get to the top.

Jon Hershey, dean of the humanities division and Brother 2 Brother adviser, said, “I never had any doubt or question that Victor was headed for superstardom.”

He then added, “I knew he would become a news anchor sooner than later.”

Williams was also recently chosen to do a WSB-TV internship during the spring semester.