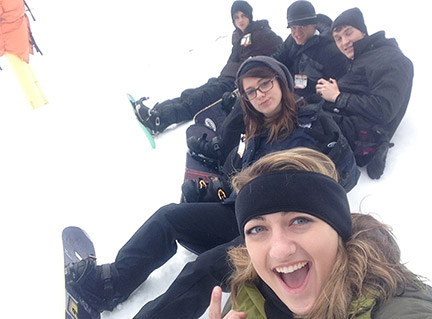 January: GHC students take a break from snowboarding to snap a picture. Contributed.

MARCH
1    – Lady Chargers basketball team goes to the final round of the GCAA playoffs.
19    – Board of Regents passes a policy banning tobacco use at all schools in the University system of Georgia.

APRIL
15    – Board of Regents raises tuition for 27 out of 31 institutions for the third year in a row.
22    – Brother 2 Brother is honored with the national Chapter of the Year award.
24    – Cartersville’s student HUB is renamed in memory of Dean Carolyn Hamrick, who died in January.
26-27- The 29th annual Alabama Shakespeare Festival trip is held.
26-29- The UR-IT club went to Washington, D.C. for the Posters on the Hill conference.