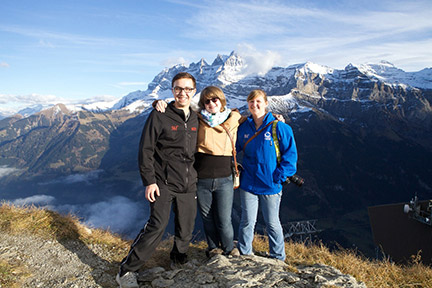 Sarah Lane, former assistant editor for the Six Mile Post and GHC student, embarked on a journey to Switzerland over Thanksgiving break for the adventure of a lifetime.

Lane applied for the journalist position on the Sports Media Trainee Program hosted by the World Curling Federation.

“I received a call around nine in the morning letting me know that I won,” Lane stated. “I screamed in the poor guy’s ear, but I was just so excited!”

Over the course of the trip, Lane got to meet some of the athletes she has watched and followed since the Winter Olympics and describes meeting them as “unbelievable.”

Spending at least 13 hour s a day at the arena, Lane’s day was filled with following the games and helping create reports at the end of each game, along with writing and interviewing.

She said, “Being part of the Six Mile Post got me into journalism in the first place,” Lane stated.

“I was intending to get a position on the literary magazine. Unfortunately that didn’t happen, so I turned to the Six Mile Post, and I was able to blossom there with the guidance of Dr. Kemper and Ms. Wheeler.”

She continued, “I wound up having a fantastic couple of years at GHC which allowed me to go on to become President of the Press Association and work for the Red & Black for a year and now write for a global audience.”

With this “intense” yet “amazing” experience, Lane has had many doors opened for her.

Lane now hopes to pursue a career in sports PR and to continue to write for a global audience.