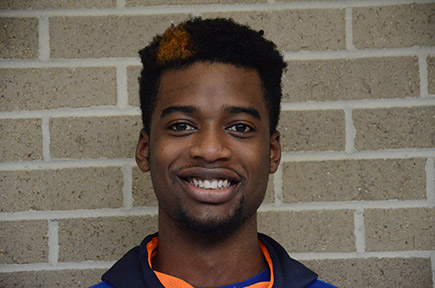 Fritz Lucien is a transfer student from Montreal, Canada, who just moved here to play basketball for Georgia Highlands College.

Lucien has liked basketball since he was a child, but did not start playing seriously until he was in high school.

He started playing for one of the best teams around Montreal, St. Laurent High School, in 2010. He played there for two years until he moved to Hazard, Ky. and played for Cordia High School.

While Lucien was playing for Cordia High School, Matt Williams, assistant men’s basketball coach, found Lucien and started talking to him about coming to play for GHC.

“I had just seen an article about him being a McDonald’s All-American Nominee, and it said that he was 6-8 and was looking to go to a junior college,” Williams said.

He continued, “At the time he was in Kentucky. I was able to get his contact information through Twitter and started talking to the people he was with and making connections with him.”

After a visit to campus, Lucien decided that GHC would be his next move.

When Lucien graduated in 2014, he signed on with the Chargers basketball team.

Since he has been here, he has had time to see a few differences between Rome and home. “This town seems a bit smaller than the places I’ve been,” says Lucien. “Everyone is very friendly and accepting, though.”

Lucien is a physical therapy major, but he is unsure what career he is going to choose when he graduates.

Right now he is focusing on keeping his grades up so he can transfer to a four-year college.