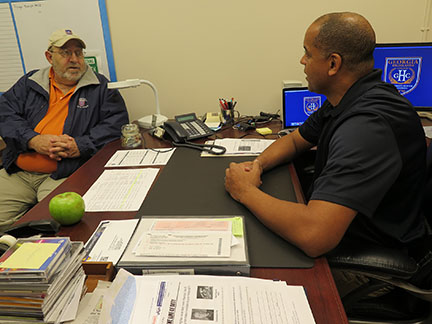 Two conflicting Georgia gun laws are causing a bit of confusion at colleges across the state, and well-meaning students are putting themselves at risk legally and academically by not clearly understanding their rights.

In a Georgia Department of Law memo available on the law.ga.gov website, State Attorney General Samuel Olens spoke about the confusion by saying there have been “numerous inquiries” about the “two conflicting measures.”

Georgia House Bill 60, which has been dubbed by many as the “guns everywhere” bill, allows for licensed gun owners to carry firearms in safety zones, which are defined in the Bill as bars, churches that “opt-in” and in government buildings without security screening checkpoints.

“House Bill 60 is problematic because it is misunderstood to be a bill that allows you to carry everywhere, and that is not true,” said Georgia Highland’s Chief of Police David Horace.

Alternatively, House Bill 826 works to more clearly define where guns are allowed. Under House Bill 826, licensed gun owners who have a concealed carry permit are allowed to have their weapons in their cars while parked or driving through school grounds but are not allowed to remove the weapons from their car.

“House Bill 826 does give permission for permitted gun owners to have their weapon within their personal vehicle. However, many confuse the parking lot allowance for a building allowance. That just isn’t so,” said Horace.

The problem occurs when students fail to be informed about the gun policy, said Horace.

“We have seen a couple of students carry guns into school thinking that they had a right to. We were able to resolve these issues quickly, but it is something that students need to know,” said Horace.

In addition to more clearly defining safety zones, House Bill 826 also gives administrators the right to determine the punishment for a student who brings weapons inside the school.

Horace said, “If there is an incident on campus, and a well-intentioned student is seen holding a gun, authorities don’t have the time to figure out if you’re a good guy. They will be looking for a guy with a gun. No matter a student’s intentions, it is the kind of situation would not turn out well.”

Horace stated, “It is in the best interest of all students that they understand that weapons are not allowed on campus, licensed or not.”

Students who would like to read more about House Bill 60 and House Bill 826 can do so at law.ga.gov.