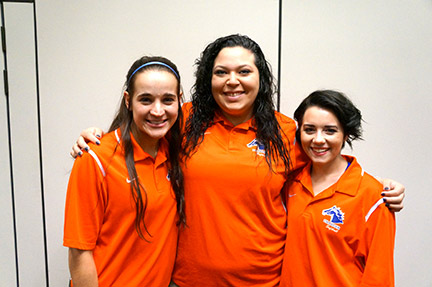 According to Coach Melissa Wood, “Our goal this season is to get a ring!”

This season the Lady Chargers have an opportunity to collect a total of three titles. The first opportunity will be the regular conference title. The team has been training nonstop during their off season in preparation for a strong start to the 2016 season. The team has had a hectic off season by scrimmaging seven D1 teams and two D2 teams.

This season the softball team is full of young faces with only four returning sophomores.

The freshmen girls have shown great promise by putting up a fight against all of the teams they scrimmaged against in the off-season. Among the new faces that played in the scrimmages, the girls who stood out were #18 Kayla Street who pitched against Tennessee Tech, catcher #15 Caitlin Parks who showed great consistency from game to game and #16 Brianna Fickes who impressed as the team’s first baseman. By playing those rigorous games, the Lady Chargers gained a great deal of experience which they hope will show in the regular conference games and help lead the team to their first conference title.

Wood stated, “First we must concentrate on winning our conference and then we will tackle what comes next.”

The next opportunity for a title win will come to the Lady Chargers at the regional tournament. The Lady Chargers had a good showing last season coming in fifth place. This year their goal is to win. The region tournament takes place after the demanding regular conference games. The team will face different obstacles in the tournament than they did in the regular season.

“My biggest concerns would be to not get burned out, to not get unmotivated and to prevent injuries,” said #23 Jace Armstrong, the team’s closing pitcher, when discussing the team’s obstacles going into the regional tournament and possibly the national championship title.

The Georgia Highlands College softball team takes the field for their first conference game of the season at home on Friday, Feb. 26 at 5 p.m. versus Darton State College at Stars Field.

This softball season promises to be an exciting journey and the Lady Chargers hope to make 2016 their year.