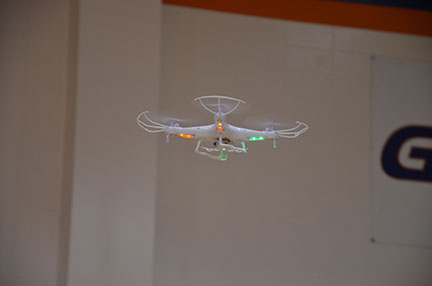 Drones are now available to check out at all GHC libraries. Alex Jackson, a student at the Floyd campus, stated, “I did not know about the drones, but it would be interesting to see and even control one.”

There was originally one drone assigned to each campus, but the Rome and Cartersville drones were stuck in trees. This made the drones unavailable for students to check out.

To accommodate the need for drones, the library has purchased four more X5C Explorers 2.4Gs. With the addition of the new drones and the drones salvaged from trees, each campus library currently has two drones assigned to them.

These drones are relatively light at .25 pounds, and they come equipped with an HD camera and a micro SD card.

These drones may be difficult to control at first, but the libraries have an instruction booklet available for students who are completely new to flying drones.

The library recommends charging the drones before use. The librarians also recommend that students time how long their drone is in flight since these drones can only fly for eight to ten minutes.

There are also a few restrictions to using the library’s drones. Georgia Highlands’ Dean of Libraries Elijah Scott, said, “If it’s windy or raining, it is probably not a good idea to fly one.” In addition, the FAA forbids flying above 400 feet, within five miles of the nearest airport and flying near stadiums or people.

Drones may be checked out for free, however, if a student happens to damage a drone, they have to make a payment of 85 dollars to the library.

Students can currently check the availability of drones online by typing “drones” into the “books and more” option on the library’s homepage.