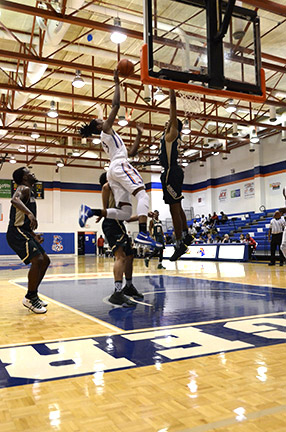 The Chargers lost their quarterfinal game against Ranger College with a final score of 81-91.

The team suffered from a slow start in the first half of the game which they were not able to recover from.

Despite making a strong comeback in the last half, the Chargers were unable to pull ahead.

With this loss, the Chargers are out of the NJCAA National tournament.

The GHC Chargers advanced to the next round of the NJCAA Nationals with a win of 83-69 against Northeast Oklahoma on March 16.

The Chargers maintained a lead at the half of 48-33, which they carried into the second half.

The Chargers next game will be Thursday, March 17 at 9 p.m. Live streaming of the game can be found at njcaatv.com. There will be big-screen viewing of the game at the Floyd campus library’s Three Rivers Room. The viewing will also happen Friday and Saturday as long as the Chargers continue to win.

The Chargers are competing for the second consecutive year in the NJCAA National Championship in Hutchinson, Kansas. Competing as the 3rd seed, the Chargers first game is scheduled for March 16 at 7 p.m. For updates, head to sixmilepost.com.

The GHC Chargers are the NJCAA Region 17 champs for the second year in a row.

The team defeated the Central Georgia Tech Titans 78-72 Saturday March 5 in the Floyd campus gym to take the championship title. This victory guaranteed the Chargers a seat in the NJCAA National Tournament in Hutchinson, Kansas.

The Chargers started off the tournament with a 104-95 victory against East Georgia State on March 1. The team then advanced to the semi-finals March 4, where they defeated Chattahoochee Tech 100-79.

In the championship game, the Chargers suffered from a slow start. The team was down by 12 points during the first half. However, by halftime, the Chargers had managed to tie the game 37-37. They then pulled ahead during the second half, winning and advancing to the national tournament.

Guard Tylik Evans shared his thoughts about the team. “I’m really proud of my teammates. Without our teamwork, we wouldn’t have been able to make it this far,” Evans said.

This marks the second consecutive year the Chargers have made it to the national tournament. Last year, the team was able to make it all the way to the Final Four, a feat which they hope to achieve again.

At the end of the Regional Championship game, Phil Gaffney, GHC head basketball coach and director of athletics, was presented the award for Georgia Collegiate Athletic Association 2016 Division I Coach of the Year. (Insert quote)

Several members of the team have also received GCAA awards.

The team, which is ranked #2 nationwide, was undefeated in conference play and has an overall record of 32-1 for the season.

The Chargers are competing for the second consecutive year in the NJCAA National Championship in Hutchinson, Kansas. Competing as the 3rd seed, the Chargers first game is scheduled for March 16 at 7 p.m.