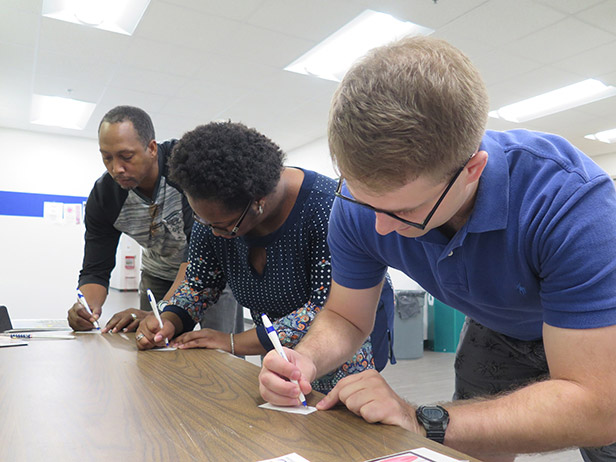 Club members (from left) Justine Dillard, Rodney Dillard and Greyson Oswalt-Smith vote for president in the mock election hosted by the Political Science and Criminal Justice Club at the GHC Floyd Campus. Photo by Luis Martinez

An election night viewing party on the Floyd campus will cap a season full of activity for the Political Science/Criminal Justice Club.

All GHC students, faculty and staff are invited to the event, which will begin at 6:30 p.m. on Nov. 8 in the Three Rivers Room of the library.

Free slices of pizza and soft drinks will be provided as everyone watches the election results unfold on two separate screens, one tuned to Fox News and the other to CNN.

The club also held a public forum at the Floyd campus on Oct. 18, where students got the opportunity to hear Floyd County probate judge, the Honorable Steve Burkhalter, speak on legal and political topics.

The forums were recorded by the GHC digital media services department for playback on GHTV, WRGA radio and GHC’s YouTube channel youtube.com/ghconlinetv.

The club is open to any and all GHC students, faculty and staff who have a particular interest in the areas of political science and criminal justice.