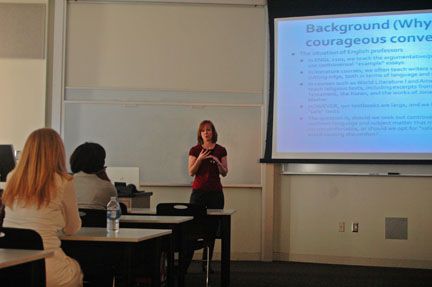 In a classroom on the Cartersville campus, teachers talked about how to deal with controversial topics. They brainstormed on how to handle name-calling and also how to teach difficult subjects like race, prejudice, sex and violence.

This was part of the theme of the Oct. 19 event, “Can I Say That? Hot Button Issues in the Classroom” which invited professors to discuss all those issues and more.

The main speaker at the event was Nancy Applegate, professor of English on the Floyd campus. She delivered a Powerpoint presentation giving discussion topics to the audience. “It’s an attempt to discuss issues of diversity,” said Applegate.

Several professors shared stories of bias, and asked how they could have handled it better. They repeatedly expressed how important this kind of feedback was from fellow faculty and staff.

Another topic was bullying. The faculty stated that it was becoming a serious problem in the classroom and discussed how it might be mediated if it arises in classroom discussion. Some told stories of bullying happening in their own classrooms.

“We work on and off with student groups,” said Jesse Bishop, assistant professor of English at the Cartersville campus and the director of the Diversity Initiative. “We hope to be more involved with them as time goes on.”

Students are encouraged to come to the Courageous Conversations on their own campuses. The Nov. 10 event at the Cartersville campus called “(Mis)labeling & (Mis)understanding.” There will be another event Nov. 29 at 12:30 p.m. at the Douglasville campus called “Come Let Us Reason Together.”