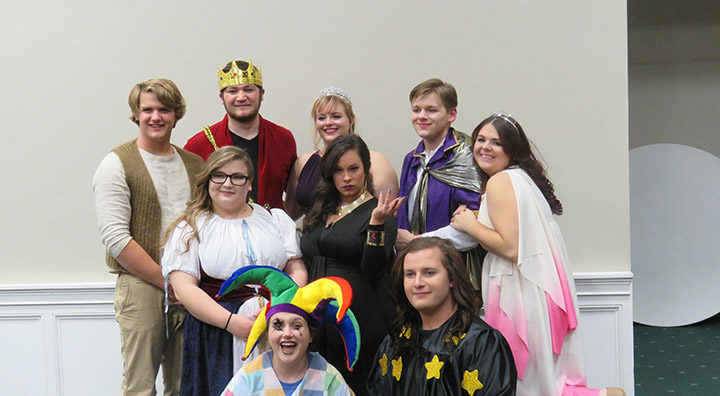 The GHC Players theatrical club grew out of a musical ensemble class when there was a desire to learn and perform more songs than time allowed.

Bryce Pitts, president of the Players, inquired about a theatrical club to further her and other club/class member’s theatrical experience. The students took over the pre-existing club in October and renamed it the GHC Repertory Players, GHC Players for short.

Adjunct instructor of music and teacher of GHC’s musical Ensemble class Julie Carver became the adviser of the GHC Players. Carver is also the owner of a theatrical coaching service called The Callback Company.

The group was contemplating ways to raise money for the club when Carver suggested they sing carols and have a dessert buffet at Heritage Hall.

They ran with the idea, reserving the venue, booking the catering company and organizing a full dinner show.

Their first play “Murder Under the Mistletoe” sold out 150 tickets at Heritage Hall on Dec. 16, 2016. Pitts and club member Kendalyn Millsap wrote the script for the play together.

The three-course meal was catered by GHC’s Floyd catering company.

She continued, “I am just so proud of these students making this happen, especially that production.”

Their next performance is still in the works, but they are currently thinking of a showcase of different songs and acts with some original narration around the end of April or beginning of May.

There will be auditions open to students and teachers of all campuses.

According to Pitts, “When people think of theater and the arts they just think acting. But really there’s so much more that goes beyond it.”

She also said, “There’s a place for everybody, so it’s not only for actors.”

There are ways to get involved other than just being an actor.

People interested in being a part of the stage crew, set design and set building can contact Pitts by emailing her at [email protected]