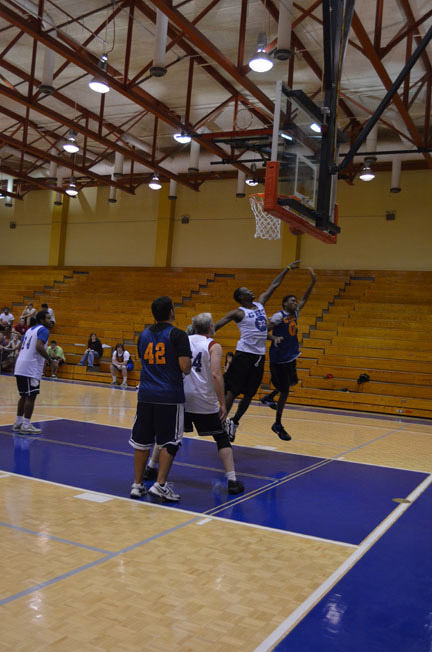 Chris Hill (32) of True Grit and Rashaun Dean of GHC Hoopers fight for a rebound in the Intramural Basketball championship game. Photo by Catlyn Mullinax.

True Grit took the intramural basketball championship title in the last 30 seconds of the game.

True Grit faced off against The GHC Hoopers on Nov. 11 for the last time this basketball season. Rashaun Dean was the leading scorer in the first half with 12 out of a total of 16 points made. T.J. Huston and Eslam Leung scored the other two baskets. Jason McFry and Chris Hill led True Grit with six points each.

The GHC Hoopers led by 4 points at the half.

The second half was just as close as the first. Dean again was the top scorer for the GHC Hoopers with 8 of the team’s points, while True Grit stepped up their game with Hill making 10 of his team’s points.

The winning basket was shot by Seth Ingram with 30 seconds left in the game. This made the final score 30 GHC Hoopers, 33 True Grit.