Despite recent tragedies America is still able to stand together strong 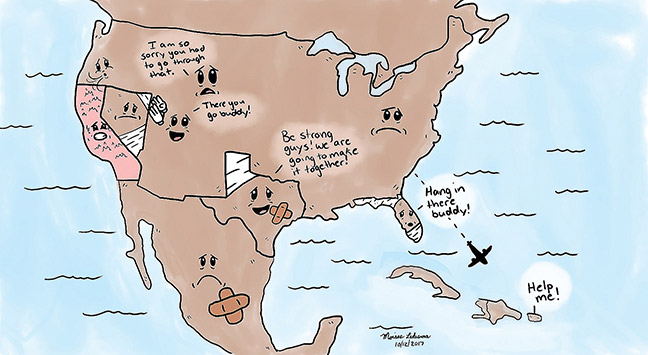 Within the past couple of months the United States’ strength as a country has been put to the test.

Disasters instilled fear into the hearts of many Americans following the storms that destroyed Texas, Florida and the Caribbean, as well as the Las Vegas shooting and the California wildfires.

These events happened back to back. The states and islands that were obliterated by the storms were still in the process of getting their homes and communities back to normal when the largest mass shooting in America occurred.

However, these tragedies showed that our country is not broken easily. People all over the country have shared love and support to victims of both the hurricanes and the Las Vegas shootings.

Social media activists, celebrities and average Americans took to their social media platforms to share words of encouragement and prayers for the victims of the shooting. Multiple C130 cargo planes were loaded with relief supplies at Dobbins Airforce base in Atlanta and flown down to Puerto Rico.

President Trump visited hospitals in Vegas to shake the hands of people shot at the Harvest Music Festival.
Along with the country as a whole aiding Texas, Florida, Puerto Rico and Caribbean islands, individual heroes have been discovered during the time of tragedy.

Normal people felt a call to action upon being caught in the storms as well as the shooting.
Former Marine Taylor Winston loaded his pickup truck with victims of the shooting and transported them to a hospital. Winston made two trips and was able to bring two dozen people to the hospital.

Stephen Kimmel, a doctor in Texas, took to his canoe and paddled all over the city of Houston in the efforts to help people that were injured by Hurricane Harvey.

These are just a few examples of the many heroes that emerged from the shooting and, wildfires, as well as the storms.

Disasters have struck our nation, but the way our country reacts to these disasters says a lot about us. The United States is made up of people of every race, religion and political view. However, none of these things mean anything when the lives of a fellow American are at risk.