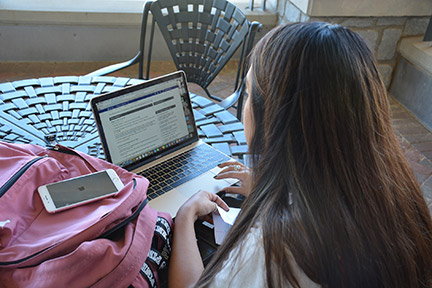 The Cartersville campus will be getting a new upgrade to its wireless system. The system was first installed back in 2005, during what Rob Laltrello, the chief technology officer of the IT department at GHC, describes as “the pre-iPhone era.”

Chris Pelfrey, the director of information security & network services of the IT department at GHC, said, “Having a wireless system was not very common back then, but now being wireless is a necessity.”

According to Laltrello, “These new upgrades are a renovation to what is already installed.” The purpose of the new wireless system is to enable both faculty and students to bring their own devices to do their work and to provide a connectivity that is reliable and can help students get through their classes. It is not to be a revolution in IT. It is just a way for students to say, “Wow, it’s not slow anymore,” as Latrello puts it. But as Pelfrey explains, “You’re only as fast as your slowest connection.”

The distribution is like a water flow, as it allows the internet to travel to access points. The access points are what allow devices to connect to the internet. There will be 30 new access points installed across the Cartersville campus and they will be in the classrooms, library, high traffic areas and outside the HUB of the Cartersville campus. While the hardware is all new, the software side of the new wireless system is mostly the same, but it will be updated to allow the IT department to better protect users’ privacy.

Complaints about the internet access at the Cartersville campus started around 2015. With the age of the equipment and the campus growing, it was time for the wireless system at Cartersville to be upgraded according to Pelfrey and Laltrello. They also said that it can be an expensive endeavor as well, costing thousands of dollars and even being a 10-year investment. Pelfrey said, “Feedback from faculty, staff and students is always taken seriously.”

The wireless system was demonstrated not too long ago at the gym on the Floyd campus, and the response from students was very positive as they were able to stream games in the gym. The new wireless system will be controlled by Pelfrey and a team consisting of six people in a group called Information Security and Network Services of which Pelfrey is the director.

“It is a team effort, and we will continue to be the invisible support to help students do their work with a no hassle experience,” said Pelfrey. Laltrello also said, “Pelfrey is awesome as he does a tremendous amount of work into the system and knows a lot of what happens behind the scenes.”

Expansions have already been planned to go out to the other campuses of GHC. The one in Floyd is already done, while the systems at Heritage Hall, Paulding and Douglasville are scheduled to be completed around the fall of 2018. The new wireless system at Cartersville is expected to be completely installed as a whole by the end of 2018.