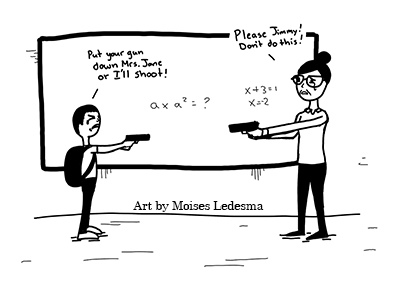 Every day there is a new conflict. In these times, it seems like  days without some kind of mass shooting are becoming fewer by the day with very little time in between. All of those people who passed away died at the hand of men with guns.

There are those who believe that if there were more people with guns at the scenes of the shootings, it would have prevented the deaths of all those people because they would have had the tools necessary to prevent those deaths, and by taking guns away, people are taking away the right to bear arms given by the Second Amendment.

But there are also others who believe that if the shooters did not have access to guns in the first place, particularly guns used in military combat, these shootings would never have happened and that would be much safer if these types of guns could not be sold like any other gun.

President Donald Trump has stated that in order to stop these shootings, particularly at schools, that we must arm the teachers with guns so that the schools can be better prepared when a shooter reaches campus.

It seems that everything that can go wrong with giving teachers guns will go wrong. It can make them the first target for actual shooters.

Gun control does not mean that the Government should raid everyone house and take everyone’s guns away. It means that we should keep certain kind of weapons out of the hands of the public and ensure rules on guns are logical, safe and effective and do not interfere with the Second Amendment.

But it is so easy to buy any kind of gun now. People can buy guns like appliances. Buying guns should be like adopting a child, with people doing their homework on guns, contacting experts, doing extreme background checks and signing mountains of contracts and tedious time.

Plus, there seems to be a romanticism when it comes to guns. But guns, are not a toy, or an accessory, or a symbol of freedom or masculinity. They are made to kill, nothing more.

If people want to see gun control in action, they must call their state representatives. If they have suggestions, they should voice them. People have to call everyday and let them know that fighting fire with fire is not always the solution.