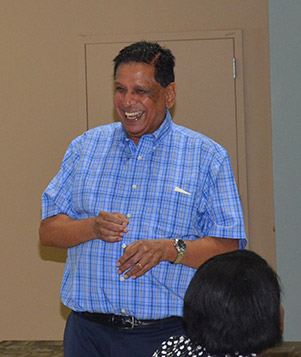 Students learned about doing business in Asia and India at a consortium in the Lakeview Building on Sept. 12. Raj Shashti, a Fullbright Scholar, was the speaker.

A consortium is an event where a group of schools get together and work on a common task. The purpose of the consortium was to open students up to doing business in foreign countries, particularly in the growing economies of Asia and India.

While consortiums have been done for faculty in the past, this consortium was done specifically with students in mind.

All students were welcomed at the event, regardless of their major.

According to Bronson Long, associate professor of history and director of global initiatives, “No matter who you are, whether you become a teacher, a nurse or a police officer, you will have to deal with Asia or India at some point in your life.”

Long also mentioned that the event was good for people looking to get into management roles as well.

More and more businesses have been moving to China and India from the United States. Denie Burks, assistant professor of business, said, “Asia builds relationships first, whereas America is the opposite when it comes to business.”

Shashti, the director of the Nine University and College International Studies Consortium of Georgia, came to America from India in the 1960s. He got both his bachelor’s and master’s degrees in geography and went on to teach the subject. Now he is devoted to international education and has received numerous Fullbright scholarships, which allow people to study and teach overseas.

At the consortium, Shashti talked about the major differences in business between America, Asia and India through their economies, cultural aspects and core values. He showed how America is more about making deals, maximizing profits, making changes fast and being more frank and candid. In Asia, business is more about building relationships, establishing long-term foundations, making moves when ready, and being more indirect while doing business.

Shashti even showed how the cultures of both Asia and India are growing. He said that the number of people that own iPhones is greater in India than in the United States. He also said that Mandarin Chinese is the most spoken language in the world, not English.

According to Shashti, “Who you know is more important than what you know in Asia, which is the opposite in the United States.” Shashti said, “The business card is like an extension of your heart in Japan.”

Shashti left students with one last piece of advice,  “American students need to think about getting A’s or B’s and not C’s in order to graduate, all while having a fire in your belly and by working hard.”

To see more of the Business in Asia and India Consortium, please check out the slideshow down below.