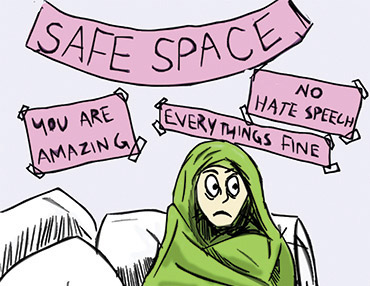 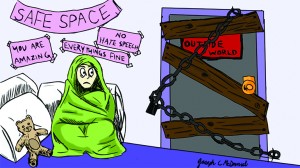 On many college campuses “safe spaces are becoming a more common term. People are beginning to use them to duck out from some of the more hurtful or uncomfortable things that are in the world. Anxiety and depression might emanate from these things, but the problem with safe spaces on college campuses is that they are stopping people from going into the world prepared.

Of course everyone should be safe from physical violence and direct threats. There are awful people that might try to inflict something terrible on certain groups. But many times the concept of safe spaces unfortunately goes beyond that. It deals with being sheltered from words and ideas themselves that might be foreign and perhaps not as cozy to students. It deals with the term “hate speech” being blurred until it practically means “any statement I happen to dislike.” This signifies something drastic for open free speech.

College is when one should transition from an immature teenager into an adult heading out into the real world. In reality, people should be prepared to face what’s ahead because there won’t be any safe spaces to slink back into. Safe spaces and getting used to the notion that everything should be comfortable can make college students into sheltered infants hiding from scary ideas.

College students are beginning to protest speakers who might have messages they disapprove of or even standup comedians whose jokes aren’t completely innocuous. Going forwards in life we need to learn how to ignore or confront things we face as opposed to running and hiding from problems. We need to be able to open up our minds to new concepts.

Not everyone can be liked by all, and that’s ok. Not everything others say will be something we agree with. This generation should be able to face the music without retreating into a soundproof coffin.