Player from England, Jessica Yates, felt at home right away 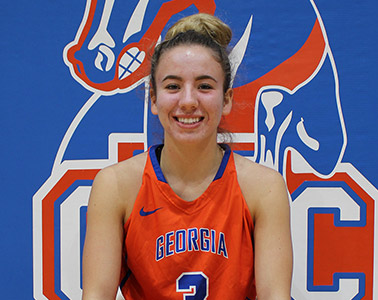 Yates is from Manchester, England and says she chose Georgia Highlands to play basketball here because it felt like home.  “I didn’t come on a visit, but I did talk to Coach Harrell on the phone. It felt like home straight away,” Yates said. “Even though I never visited here it felt like home and everyone made it feel like home too.” She said. “It is huge to have that because I left all my family and friends so its nice to have a home away from home,” Yates said.

Yates says that her transition from England to the Unites states was not as hard as most people would think.

Yates’ grandparents played on both national teams for England. She was always around basketball, but she says her mom tried to get her to play a different sport.

“My mom tried to steer me away from basketball to instead play soccer with my brother. So, I guess my grandparents had their own way of getting me into it,” Yates said with a smile. She began basketball in high school.

The next home game for the Lady Chargers is on Nov. 14 against Southern Crescent Technical College.