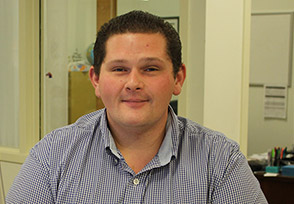 “The defining unique characteristic of GHC is a focus on educational access. It is not something you find everywhere,” said  Julius Fleschner, the new dean of libraries and college testing.

Though working at a multisite institution is new to him, Fleschner is now overseeing all GHC libraries and college testing on all campuses.

Fleschner grew up in Long Island, New York, and after high school moved to the Tampa Bay area, where he attended St. Petersburg College and earned his associate of art in social work.

He then went on to get his bachelor’s of art in psychology from the University of South Florida.

Also at USF Fleschner earned his master’s in library and information science.

Fleschner has worked as a reference and instruction librarian in Sioux City, Iowa. Two years into his time in Iowa, Fleschner was offered a directorship.

Fleschner said, “I think my favorite part of my job so far has been interacting with the students, as I am still getting to know the college, libraries, and testing centers.”

He has been working at the circulation desk as much as possible.

“Even if it is just checking out a calculator, I like to tell the students I believe in them and to go get an A. GHC students are really great,” said Fleschner.

According to Fleschner he loves that the library offers Kanopy to the students.

Fleschner said, “This is an excellent streaming film database. If you like classic movies or documentaries, you really should check this one out. It’ll work on a streaming stick or box, too.”

On a weekly basis as the dean of libraries and college testing, Fleschner travels mainly between the Rome and Cartersville campus. However, he can be found on almost any campus at any time.

Fleschner said, “I try to be in Rome Monday through Wednesday and Cartersville Thursday and Friday, but it seems there is always something that comes up that requires me to adjust my schedule. That’s actually one of the things I like the most. It’ll keep you on your toes.”