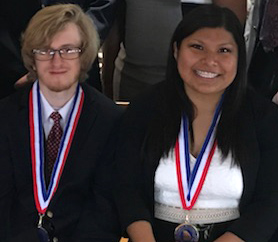 PTK recently held an awards luncheon in the Empire Room of the Sloppy Floyd Building in downtown Atlanta and 12 people attended from GHC.

Out of the nine institutions in attendance, GHC had the most All-Georgia Academic Scholars present with five.

Todd Jones commented on this, saying he believed this speaks to the quality of the students in our Phi Theta Kappa chapter and the work of our faculty advisors who support this organization on campus at all locations.

These scholars all received All-Georgia Academic Team awards: Karishmaben Patel, Lisa Donohue, Tajera Davy, Cindy Mendoza Razo, Nicholas Whitmire, and Vanessa Cornejo (not in attendance), and there was a New Century Scholar and a Bronze Scholar from other institutions.

At this event, a roast beef dinner and the scholarships awarded were provided by the Atlanta based Coco-Cola Company.

The keynote speaker was Felicia Wasson, who works in the Community and Stakeholder Relations department of the Coca-Cola Company.

She told of her challenges enrolling in college and how she was unsure of what to do until a faculty member helped lead her in the right direction.

That faculty member went above and beyond by even working with her to overcome a stuttering problem.

This helped lead to Wasson’s decision to become a communications major in college.

Those who attended the March 27 event from GHC were Karen Huggin, assistant professor and lead advisor to the GHC PTK organization at GHC, Donald Green, president, Todd Jones, vice president for student affairs and the five GHC students.

Jones said, “Huggin in particular has done a wonderful job serving as lead advisor and continues to be a strong advocate for our students in their academic pursuits and in finding academic scholarships for those that transfer with their associate degree to other institutions.”