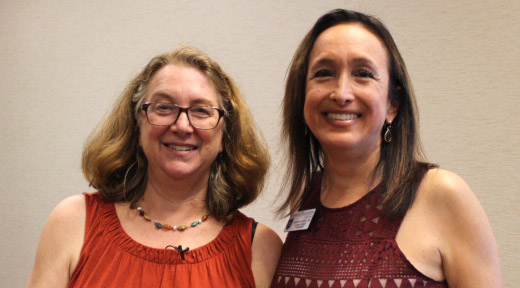 MacMurdo Reiter had recently found out that her grandfather, a Polish diplomat, was part of a group of men who acquired blank passports from Paraguay and other countries and forged them to help Jewish families escape from death during World War II.

GHC published a story about this in The Highlander. GHC’s public relations department pitched this story to local newspaper outlets. The Cartersville Daily Tribune picked it up as a front page story. Shortly after this article was published, Fishman contacted MacMurdo Reiter from Vermont and told her that her grandfather (and family) were saved by one of her grandfather’s passports. Shocked, MacMurdo Reiter couldn’t believe that: “She is here and alive because of these passports,” she said.

In the presentation, MacMurdo Reiter thanked their ancestors, “They have allowed some special women to become historians.” Fishman and MacMurdo Reiter then delved into the research and background behind these passports.

Fishman’s mother, Ruth, was born two months after the Nuremberg Race Laws came out. To get away, her grandfather, Lichtenstern, moved their family to Amsterdam. Unfortunately, the Nazi’s invaded Amsterdam in 1940.

Once the Nazi’s invaded, Fishman’s family was sent to Westerbork, a concentration camp and stayed there for nine months. Fishman’s family was fortunate enough to stay alive at this camp. Therefore when Fishman’s grandfather received news that he was going to be transferred to Auschwitz, an extermination camp, they were devastated.

When her grandfather was lining up to be transported to Auschwitz, someone reminded him about the fake passport he had.

Not really believing it would work, he decided to try using it anyway.

Years later, his granddaughter is now able to share this story thanks to his forged passport. When he showed this passport, instead of being sent to Auschwitz, he and his family were transferred to Theresienstadt. This camp was considered in this time period a “privileged camp,” according to Fishman.

Although this camp might have been considered “privileged” compared to the extermination camps, 33,000 people died from malnutrition and disease at this camp.

This passport was created by a Bernese group known as the Latos group.

MacMurdo’s Reiter grandfather just so happened to be one of the three Polish diplomats who helped make these passports happen.

Taking the speech to a conclusion, Fishman shared that around 8,300-8,700 people got a hold of these foreign passports, and 3,000-4,000 of these people survived

Although the Holocaust and these events are from the past, Fishman reminded everyone, “There are still things being done in the world to target certain groups of people.”

She explained that the Holocaust did not start with gas chambers.

It started with words and people treating each other differently just because of appearance or different beliefs. “As humans, we have to stop doing that,” she said.

Before ending their speech to move on to the reception and Fishman’s book signing, MacMurdo Reiter requested that the audience “Please, carry the message of peace on forward and be a blessing, just like the Latos group.” She added, “You too, can be a hero, by simply being kind.”

Students who want to read more into this history, can purchase Fishman’s novel, “Tutti’s Promise,” based on her family’s experience, especially her mother, Tutti’s, time during the Holocaust.