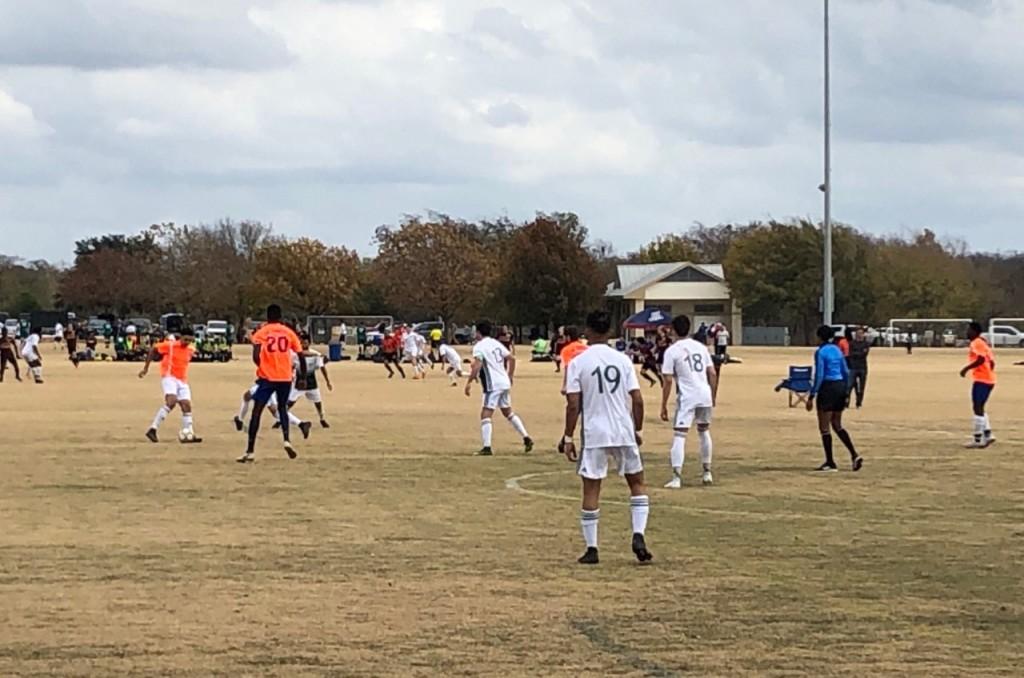 Over the Thanksgiving break, the GHC club soccer team traveled to Round Rock, Texas to participate in the NIRSA National Soccer Championship Tournament. GHC was randomly selected to “Pool A” which included Utah Valley University, Xavier and the University of Minnesota.

Throughout this season, the men’s soccer coach, John Spranza, noted that the team has not been able to spend much time together due to conflicting school and work schedules. The tournament was one of the first times all year that the team was able to be all together. Right before the tournament the team had their first practice where “we finally got a full squad,” said Spranza. The day after that practice, the team left on a 15-hour bus ride to Texas.

In the first game of the tournament, GHC squared off with Utah Valley. The Chargers started off strong, keeping up with an older Utah Valley team. In the 38th minute, Utah Valley took the lead, barely beating Keeper Brandon Romero. GHC was held to only five shots in the game and conceded a late goal for a final score of 2-0.

The following day, GHC played in its second game of pool play against Xavier University. After a competitive back and forth start to the game, it was Fernando Barrientos who broke the tie, scoring a free kick in the 22nd minute. Xavier equalized with a penalty kick in the 33rd, but Barrientos scored another free kick late in the second half to give GHC the victory.

With a playoff spot on the line, the Chargers went into their final pool play game against Minnesota very motivated. In the first half, Barrientos sent a ball into the box that Camp would put in the back of the net. The game went to half with a score of 1-0. After the break, Minnesota found themselves in the lead with two early goals in the second half. GHC found their way back in with a tying goal from Touray. However, the effort would not be enough as Minnesota scored another goal and focused on maintaining their lead until the whistle.

The team was disappointed to receive no points after their battle with Minnesota, but Spranza said, “This was the best game we played in months.” Even though GHC finished fourth place in their group, they were the only first year participant to win a game. In addition to that win, GHC also came home with the team sportsmanship award for the tournament.

The Men’s Intramural Soccer team was selected to be a participant in the National Intramural & Recreational Sports Association (NIRSA) Open Championship Tournament on November 21-23 in Round Rock, Texas.

They missed the original cut for the tournament and had to be put on the alternate list.

But, one of the previously selected teams was unable to complete their registration which allowed GHC to take the open spot. The men’s soccer team consists of about 30 players from all campuses except Douglasville. In the inaugural season the club was small and only played in mixed gender leagues.

The club is only in its third year of existence, but the men’s team has already been selected for the Southern Collegiate Soccer Association (SCSA). In addition to being part of the SCSA, the club also belongs to the NIRSA.

In fall play against fellow SCSA teams, the Chargers achieved a 5-3record. Coach John Spranza said “the team competed well against experienced teams from larger institutions.” The NIRSA tournament will host 24 teams and divide them into six groups of four teams. Each team will face the other three schools in what is called group play.

Some of the other schools represented at the tournament are LSU, Florida State, Miami, UCLA, Cornell, Arizona, Minnesota and the only other school from Georgia, Georgia College & State University.

The groups of four have not been announced at this time.

Team captain, Amadou Touray has been with the team for a year and a half now and is looking forward to the challenges of the upcoming tournament. Being captain, Touray said his responsibilities include, “notifying the team members of the game time and location when a schedule change occurs.”