Nearly all campuses no longer have recycling programs 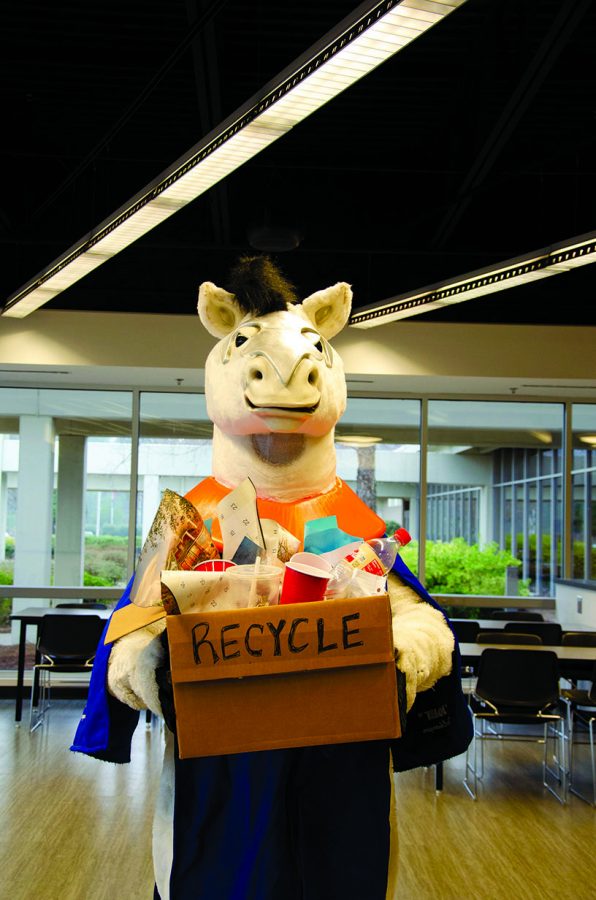 Photo Illustration by Michelle Hardin Bolt looks for a recycling bin, but a decline in student involvement has led to fewer recycling options.

Despite the presence of recycling cans on multiple campuses, the Cartersville campus is now the only GHC location that recycles.

“At one time, recycling was performed on the other campuses by student groups, but that has fallen off over the last few years,” said David Van Hook, GHC director of facilities.

Van Hook added that GHC has a partnership with Bartow County waste services to recycle materials from the Cartersville campus.

“It is my understanding that this partnership was established by a student group and has worked very well,” said Van Hook. There is no similar arrangement for other campuses. The main issue preventing other campuses from recycling is a lack of willing volunteers. “There is nowhere to store the items collected,” said Paulding site director, Christina Henggeler. “No one will take ownership of recycling by gathering and delivering the materials to the recycle center.”

Henggeler said that she encourages students and faculty to recycle on an individual basis.Until this semester, there were several recycling bins at different locations on the Floyd campus.

“I thought the school recycled,” said Kelly Samson, a criminal justice major based on Floyd campus. “I know I’ve seen the cans around campus.”

Students and faculty from the Paulding, Douglasville and Marietta campuses were unavailable for comment at this time. These campuses also do not have recycling programs. “It is my understanding that all other campuses [besides Cartersville] do not recycle,” said Van Hook.

“The biggest challenge that we have is that many people don’t put the correct things in the correct receptacles even if we have the labels,” said Cartersville campus Dean Leslie Johnson.

“If it ends up having other types of trash in there, then the county won’t go through and weed that out, so it just goes to the dump.” Johnson said that, in order for materials to be recycled, the load has to be a “clean stream” — meaning that it contains only recyclable material.

Because of this, a single piece of trash thrown in the wrong bin can send an entire dumpster full of recyclables to a landfill. In the past, students in the Green Highlands club took on the responsibility of sorting through the campus’ recycling to ensure clean streams. At present, no one is doing this necessary sorting. The lack of a formal sorting process means contaminated loads of recycling are being thrown away.

We do try to partner with our students as well,” Johnson said. “It’s wonderful to have students take some ownership of that process.” Johnson said that Cartersville campus staff are hoping to work with students to help improve the site’s recycling efforts.

“It takes a village to ‘go green’,” said Alexandra MacMurdo Reiter, assistant professor of communication and faculty advisor for Green Highlands. “It is everyone’s job to recycle.”