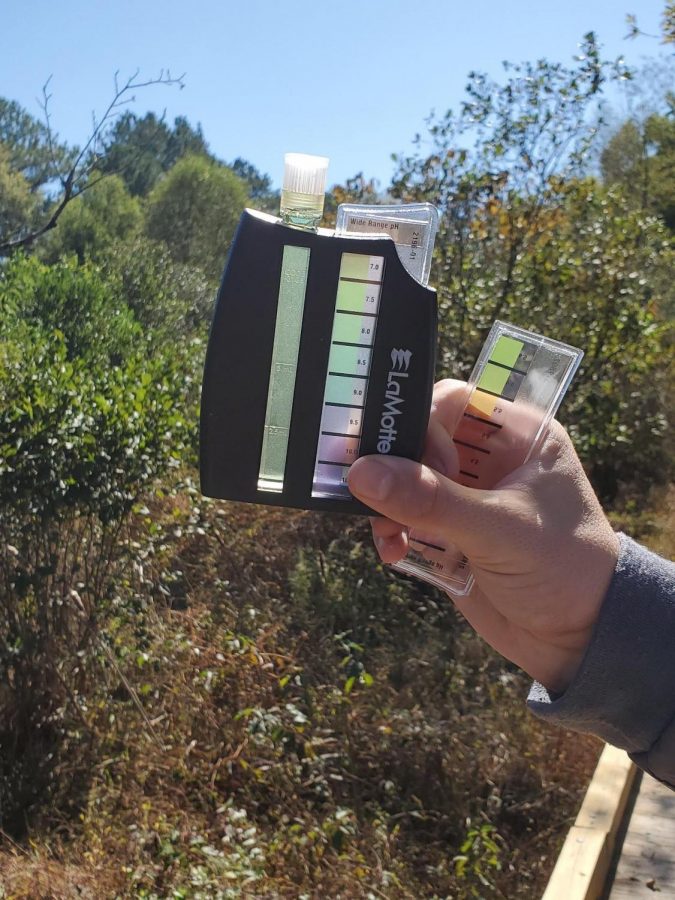 According to the U.S. Geological Survey, “pH is a measure of how acidic/basic water is. The range goes from zero to 14, with seven being neutral.”

Looking at a Lake Altoona report from the Environmental Protection Division Rules and Regulations of the State of Georgia and the standards of what pH should be in a recreational lake, Jason Christian, instructor of biology, said “Generally lakes in our region, we’re looking anywhere be-tween six and nine and a half is considered normal.”

“pH over eight point five is pretty unusual for anywhere in GA – definitely Floyd County,” said Coosa River Basin Initiative Executive Director & Riverkeeper, Jesse Demon-breun-Chapman. “There are some isolated variations but generally, anything inland over eight is pretty uncommon in this area.”The students saw pH levels above what they know “What they reported in all of their samples, the average between the three lake samples was normal,” said Christian. “They did have one, the one they reported as 10, that is, of course, outside of that range.”

The students brought their findings to Billy Morris, professor of geology, who facilitated the research. Whelchel said they were all shocked to have found this and began asking why the levels were higher than expected.

Last fall, a coal-tar sealcoat was applied to the Floyd campus parking lots. The students wanted to look deeper into the sealcoat to see if there was a connection.

According to a fact sheet prepared by Morris, “In late November 2019, the vendor applying the sealcoat confirmed that the product was a coal-tar-based sealcoat. On December 7, 2019, the Safety Data Sheet (SDS) for the product was provided. Multiple polycyclic aromatic hydrocarbons (PAHs) were listed in the SDS.”

According to The Centers for Disease Control and Prevention’s (CDC) PAH Fact Sheet, “PAHs are a class of chemicals that occur naturally in coal, crude oil, and gasoline. They also are produced when coal, oil, gas, wood, garbage and tobacco are burned.”

Demonbreun-Chapman said, “PAHs typically fall out of the water column and are closely associated with sediment particles. Additionally, some benthic invertebrates have the ability to metabolize PAHs. This leads to bioaccumulation in some invertebrates and my understanding is that the substance is quite toxic for these small species (minnows too). Larger aquatic species seem to do an okay job of excreting the toxins so they don’t really bioaccumulate up the food chain.” This information did lead to professional testing.

“The college considers the safety of its employees and students a priority,” said Jamie Petty, Vice President for Finance and Administration.

A sediment testing report by the Professional Environmental Management, Inc. was prepared on January 24. This test did detect PAHs above reporting level in two of eight sample locations. These locations were in the creek bed near the inlet from the parking lot and 25 feet down from the inlet.

There is a runoff next to the parking lot nearest Paris Lake. The two samples mentioned above are from this location. “The runoff worked exactly as intended, keeping things from getting to the lake such as oil, gas, debris, or other chemicals,” Petty said. “As far as the lake and the area around the lake, all of the tests came back clear.”

“Nothing that we have right now suggests that pH and PAHs are directly linked. In science there are indicators that aren’t directly related but they always show up together, so that’s a possibility, but, again, we have no evidence that says that’s what we’re seeing,” said Christian.

There is not enough research or data to conclude any direct connections between PAHs and pHs as suggested by the students who were doing pH testing. However, their research questions did lead people to look into the matter further.

Morris continues to look into this topic with his environmental science students. He is working to ban the use of coal-tar-based sealant in this region. Austin, Texas, The District of Columbia and Washington State have already banned the sale or use of this type of sealant, according to the EPA Stormwater Management Practice report.

As for Cheriyampurathu, Self and Whelchel, they plan to present their findings and research at the National Conference on Undergraduate Research in Bozeman, Montana, later this month.