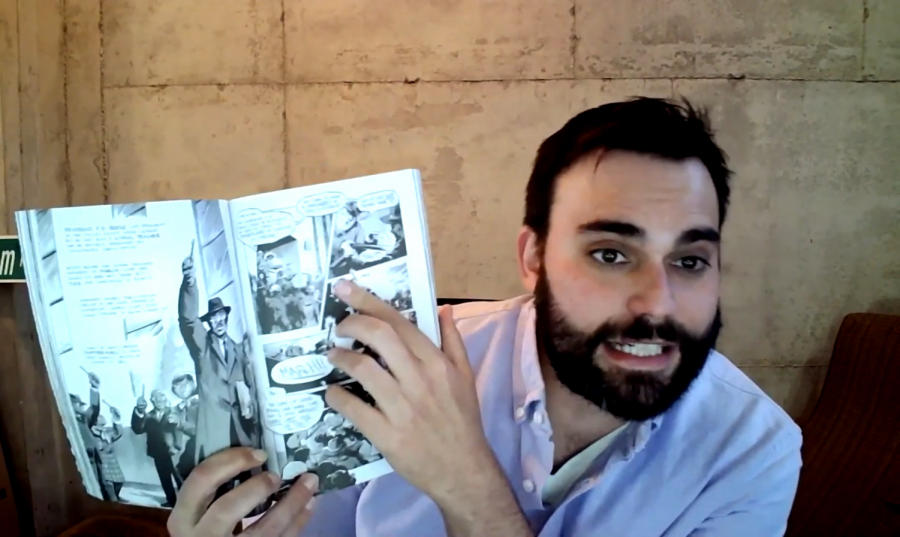 On Jan. 12, GHC welcomed “March” co-author Andrew Aydin for a discussion on the graphic novel series and his experience working with the late Congressman John Lewis.

Kimberly Lyons of the Student Spin Podcast and Russell Chesnut of the Six Mile Post moderated the Zoom interview with Aydin, which was followed by an open Q&A with students and professors. The meeting was the first in a series of “common reads” organized by GHC Student Engagement.

Raised by a single mother, Aydin grew up what he described as “99 cent hamburger poor,” because he and his mother, “only had enough money many nights to get a 99 cent Whopper for dinner.”

Aydin fell in love with comic books at a young age, attending his first convention when he was 12.

“I loved it because it was a collection of people who gathered together over their love of reading, fundamentally,” said Aydin, “I mean it was a different medium than most people would think, but that was why they gathered together — to talk about the stories, to trade, to just come together … the congressman would have called it fellowship.”

In creating “March,” Aydin surpassed his mother’s wildest expectations for him. “March” is a New York Times bestseller and has received numerous awards, including being the first graphic novel to win the National Book Award.

“That idea that you could come from nothing … and then stand on a stage with a civil rights icon in front of some of the fanciest, wealthiest, most well-to-do people in the world and hold up your comic book and say, ‘I deserve to be here.’ That to me was the highest achievement I could have,” said Aydin.

Aydin spoke on how comics like “March” can be valuable tools for teaching complex social issues such as systematic racism.

“Sequential narrative [is] the language of this generation,” said Aydin, ” I have a friend who’s a professor at San Francisco State and his name is Nick Sousanis. And we talk about this idea of information transfer theory. Like how quickly can you teach someone something that’s very complicated and nuanced? And I could give you a book, and you could learn it, but if I give you a comic book, and I do it well, you’re gonna learn it faster. And in many ways, by learning it faster, you’re going to learn it more effectively, and it’s gonna open more doors for your curiosity.”

In the words of “Maus” illustrator, Art Spiegelman, “Comics are a gateway drug to literacy.”

And in United States’ recent wake of racial unrest, Aydin has witnessed “March” take on a profound role in getting young people involved in civil rights.

It was wild actually to sorta see it come about last spring,” said Aydin, “I mean we talked about if we could get ‘March’ in schools, and we could teach a generation about nonviolent civil disobedience, that you would see an uprising among young people and a greater public consciousness around race … ‘March’ came out in 2013, and that happened in 2020 … it says something about the power of an idea whose time is come and the brief period in which change is possible.”

“When we would see those protests, we would see kids out there carrying ‘March’,” said Aydin, “We knew those kids. Those kids came to the office. So many of those leaders were kids [that] were coming from schools we speak to. And that, that was the goal.”

But even with tens of millions of people taking to the street in 2020 alone, Aydin is concerned that those sparks of civil unrest will burn out.

“I hope especially as young people read this that they’ll remember that even the existence of the graphic novel was an act of nonviolent defiance,” said Aydin, “Because it defied the common wisdom. It defied the prevailing ideas of the time. It did it anyway.”

Students interested in reading “March: Book One” can pick up a free copy at any GHC library while supplies last. Student Engagement will be holding giveaways for copies of books two and three on their social media over the semester.