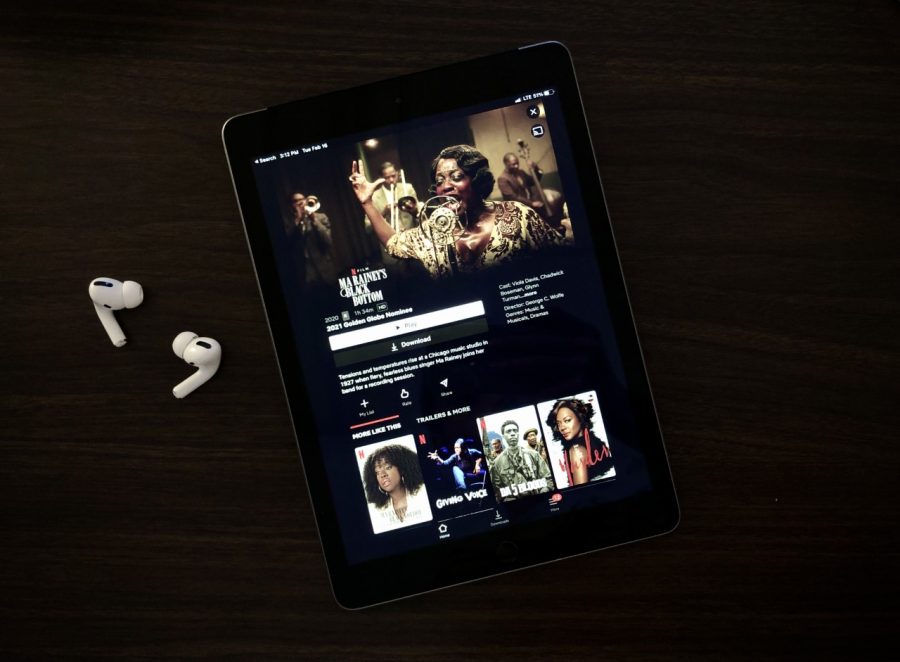 Netflix released Ma Rainey’s Black Bottom on December 18, 2020. The movie is an adaptation of an August Wilson play from 1982, and the Netflix version is as relevant today as the play was almost forty years ago. Ma Rainey’s Black Bottom is set in 1920s Chicago and mainly deals with themes of Black art and culture, racial tensions, and power dynamics.

A decade-long deep dive inspired Wilson into the blues.
Born in Pittsburgh in 1945 to a white father and African American mother, Wilson developed a passion for literature at an early age. He dropped out of high school and briefly served in the U.S. Army before returning to his native city at age 20.

He struggled at the beginning of his writing career, so he supported himself through typical jobs. While also spending his free time in local bars and restaurants, observing the daily struggles, joys, and lives of the Black neighbors. Those lives would soon become the focus of his life’s work.

Already heavily influenced by Black revolutionary activists and the works of Black writers like Amiri Baraka and James Baldwin, Wilson dove into the history of the blues, exhausting records by artists like Bessie Smith and Ma Rainey.

Born Gertrude Pridgett, Rainey claimed she was born in Georgia in 1886, although recent research suggests she may have been born four years earlier in Alabama. She was the second born of five children and, by her early teens, had taken to the stage. Rainey began performing initially as a vaudeville artist and singer on the tent show circuit. After her marriage to singer William “Pa” Rainey in 1904, the couple became a duo known as Ma and Pa Rainey, although they would later divorce.

Rainey’s early musical influences were the popular vaudeville, minstrel, and cabaret music of the era. Still, during her early touring days, she was exposed to a new form of music, soon to be known as the blues. She quickly became one of the genre’s earliest and most influential artists and influenced a generation of blues singers, including the legendary Bessie Smith, who Rainey mentored.

She popularized the deep, brassy voice and “moaning” singing style. Rainey’s bold, sometimes raunchy lyrics often explored her bisexuality and attraction to women, which was the subject of many of her songs. She entertained audiences with her stage presence by wearing flashy clothes, wigs, jewelry and a row of gold-capped teeth. Her energetic singing and dancing style sparked a short-lived dance craze called the “Black Bottom,” which was named after one of her songs, and later used as the title of Wilson’s play.

The play is set inside a recording studio on the South Side of Chicago, where Rainey lived in the early 1920s. She was famously touring the country and performing with musicians like King Oliver and a young Armstrong.

In 1923, she signed a contract with Paramount Records and became one of the first musical artists to record. Unfortunately, during those times, black musicians’ commercial and popular success usually failed to bring them financial security.

Tour promoters would regularly avoid compensating black performers fairly. In the early years of the recording industry, many Black stars signed away future royalties of their recordings and ownership of their songs to white record companies and producers. This form of exploitation and cultural theft plagued Black artists for decades to come.

The cultural theft phenomenon is explored through the character Levee, who the late Chadwick Boseman plays. While the famous Blues singer at the center of the Netflix movie is real, the story itself is fictional, including the other characters, like Levee. The plot is broadly based on a true story: the history of white men exploiting Black musicians.

Wilson examines the racial, economic, and cultural struggles of the period in his play.

At the heart of Ma Rainey’s Black Bottom is Rainey’s determination to stay true to her roots in the face of criticism of her personality. Because she is independent and authoritative, her white producer and manager perceive her negatively. Her sharp business sense and determination to avoid financial traps boxes her into being labeled a diva.

To her label and manager, she is just a way to make money. As she states, “They don’t care nothing about me. All they want is my voice.”

The success of Rainey and other traditional, “country” blues performers did little to protect them from the pressure to record music with a broader commercial appeal, and this clash is depicted in the movie. Bandmate Levee, desperately longing for respect and recognition in an era of racial oppression, considers turning away from music born of and steeped in an affirmation of Black life and the struggle for Black self-determination.

Rainey’s career was not long-lasting.

As the play depicts, musical tastes were indeed changing. Despite recording more than 100 songs in five years in the late 1920s, Rainey’s career declined as jazz, and other popular music forms took center stage. The economic downturn of the Great Depression led to a decline in touring opportunities. Rainey effectively retired in 1935, returning home to Georgia, where she managed local theaters until her death in 1939.

Because many of her Paramount recordings were of inferior audio quality, her music slipped into obscurity for decades before they were reissued in the 1960s. Her catalog’s resurgence helped Rainey reclaim her role as one of the most important and influential blues musicians. She was eventually inducted into both the Blues Foundation’s Hall of Fame and the Rock and Roll Hall of Fame.