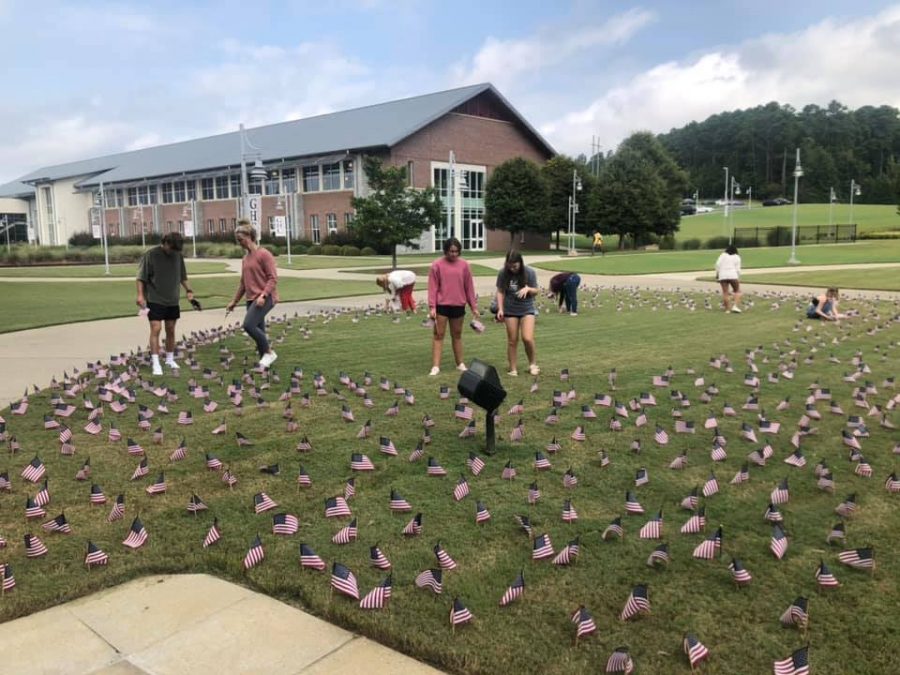 This Tuesday, GHC faculty and students placed 2977 American flags on the courtyard of the Cartersville campus for The 9/11: Never Forget Project. The display is a collaboration between the Student Veterans of America Club, the Sons of the American Revolution and English Professor, Rachel Wall, with students from her 11 a.m. literature class.

As GHC honors the 20th anniversary of the 9/11 attacks, the Six Mile Post wants to open a dialogue on the side of history often overlooked in 9/11 media coverage — what led up to the tragic events that took place on Sept. 11, 2001.

The 9/11 attacks did not happen in a vacuum. They are part of the larger story that is the United States’ involvement in the Middle East. Despite this, media outlets have made a habit of only covering play-by-plays of the disaster and the grief of survivors and victims’ families. This has left our generation — which largely grew up in the aftermath of the attacks — in the dark as to why they happened in the first place.

Why did the U.S. enter the Middle East?

The United States’ involvement in the Middle East traces back to one thing — oil.

During the Cold War, the U.S. utilized its presence in the Middle East to overthrow Iran’s democratically elected Prime Minister, Mohammad Mossadegh. This was done in an effort to maintain control over the region from the Soviet Union, who the US saw as a communist threat to Iran.

However, the validity of this threat is disputed. Many historians view the coup as a premature intervention taken to gain control of Iran’s oil fields.

These were some of the first instances of U.S. globalization in the Middle East, the continuance of which has been a source of controversy and political difficulty in the region.

In 1947, the United Nations divided Palestine into Israeli and Arab states. Shortly after, the United States recognized Israel as an independent state.

This was not received well by neighboring nations, prompting a boycott from the League of Arab States which continues to be partially enforced.

Historians argue that modern terrorism has largely been a reaction to western globalization in the Middle East. In Osama Bin Laden’s 2002 “Letter to America,” he cites the attacks on Palestine and creation of Israel as motivators for 9/11.

The Rise of al-Qaida

Osama Bin Laden first rose to military leadership during the Soviet-Afghan War. Bin Laden built a volunteer resistance to combat the Soviet Union following their 1979 invasion of Afghanistan. This group would later become al-Qaida, the perpetrators of the September 11 attacks.

Tensions between the United States and al-Qaida can be traced back to 1990. Osama Bin Laden became resentful when the Saudi Arabian government denied his request to fend off an invading Iraq in the Persian Gulf War. The government chose US troops instead.

Bin Laden chose to take an aggressive approach to US dominance in the middle east in the early 90s.

In 1994, Bin Laden started to train his militants to get more involved in conflicts around the world, issuing his first Fatwas, which are islamic legal opinions. These included the declaration of a holy war against the United States for a variety of crimes in the Middle East. He cited the looting of natural resources that he viewed as Muslim-owned and the occupation of Muslim holy cities like Mecca and Medina — the two holiest cities in the Muslim World.

Bin Laden’s ultimate goal was full-scale war between the United States and the Muslim-world. He carried out al-Qaida’s first known terrorist attack on America: the bombing of two US embassies in Kenya and Tanzania. This resulted in the death of 224 people.

From there, the United States carried out missile attacks in areas where they thought that al-Qaida forces were located. Bin Laden responded by bombing the USS Cole in 2000, which led to the death of 17 sailors.

Why does it matter?

9/11 brought the conflict in the Middle East to our doorstep. Seeing the preceding events, we have to ask how the U.S. could have handled it differently. It’s difficult for younger generations to comprehend what led up to 9/11, but historical context can inform future decisions regarding foreign policy and help prevent future tragedies.