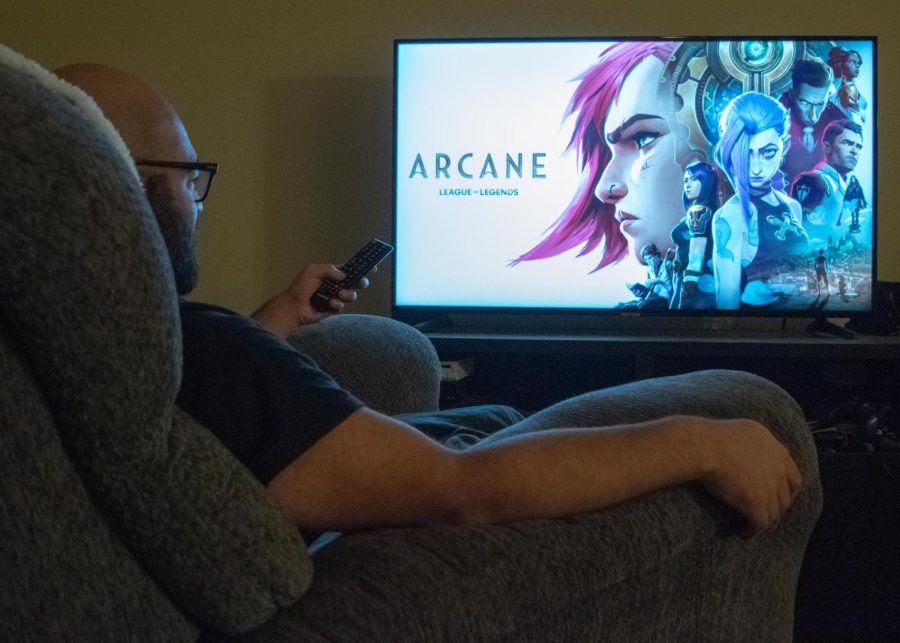 The animated series "Arcane" is now available on Netflix. It features many different characters in a steampunk-themed atmosphere. (Photo illustration)

After being postponed due to COVID, “Arcane,” an animated series developed by Riot Games and produced by Fortiche Productions, finally released on Nov. 6, 2021 and became a Netflix sensation.

The show is based on the universe of the popular online multiplayer game “League of Legends.”

It is not an exaggeration to say that “Arcane” is one of the most articulating and compelling pieces of media I have experienced in 2021.

The story of the show is told through a beautiful blend of 2D and 3D animation which serves to represent the characters and the environment around them that shape who they become.

The central focus of the show is the relationship between main characters Vi and Jinx, sisters born in Zaun who lost their parents at a young age during an insurrection between Zaun and Piltover.

The show serves as an origin story for them and other characters, chronicling each one’s struggles, achievements and growth.

The show took creative liberties with developing an LGBT relationship between two prominent characters from the popular MOBA (Multiplayer Online Battle Arena): Caitlyn, the privileged aristocrat from Piltover, and Vi, the rough street rat from Zaun.

Although their relationship builds rather quickly within the five episodes of them meeting, it doesn’t feel forced.

A major issue with most visual media is the tendency to include minority characters for inclusivity points, making them token, one-dimensional archetypes of the demographic they’re meant to represent. “Arcane” is not one of them.

Vi and Caitlyn’s trust and attraction have natural progression, going from untrusting partners bound by common interest to lowering storm-weathered barriers and finding it difficult to leave the other’s side.

Their relationship develops throughout events of the show, their closeness being revealed through body language and speech.

Georgia Dow, a psychotherapist that specializes in anxiety and depression, breaks down the iconic brothel scene from episode five of “Arcane” in her “Therapist Reacts!” Youtube video, explaining the psychology behind Vi and Caitlyn’s relationship.

Dow said: “So right away when you tell someone that you’re attractive and the way that Vi said it was not those really sugary ‘oh you’re so pretty’ compliments. This was more like a statement then she went into [Caitlyn’s] space; she cornered her. That often can be seen as a very threatening gesture unless you like the person and you can tell right away that Caitlyn was taken aback but that her breathing started to change and she didn’t try to escape.”

Those who have already watched the show may have noticed that the mere mention of the characters’ relationship being a queer one cannot be found anywhere.

According to HolyYuriMother, an LGBTQ+ anime and manga reviewer, “this was by design.”

HolyYuriMother was able to discuss this with executive story editor Amanda Overton during an interview on Dec. 7.

“Mostly we just wanted to be true to the diversity that exists in Runeterra,” Overton said. “Why should we carry the same systemic societal baggage from our world into a world that is completely different, with a completely different power structure and history?”

“Arcane” has achieved a 100% critic score and 97% audience score on Rotten Tomatoes and become Netflix’s top-rated show on IMDB with a score of 9.4/10. It was released in three acts, each act being three episodes in length.

An announcement trailer for “Arcane” season two was posted on the “League of Legends” Youtube channel immediately after the final act of season one was released, exciting fans with more to come.

“Arcane” is a seamlessly woven masterpiece of a story and people do not have to be fans of “League of Legends” to enjoy it. Anyone that likes an immersive story with organic characters are doing themselves a disservice if they have not already picked up the show.